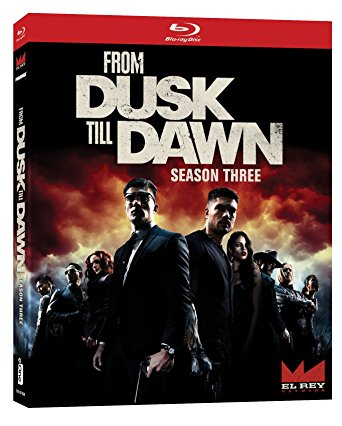 FROM DUSK TILL DAWN REVIEWED

“From Dusk Till Dawn” only had 10 episodes this season, but the action was never better. While cribbing from the CW’s Freak of the Week mold and a tad bit of The Magnificent Seven, “From Dusk Till Dawn” became the premiere show on El Rey. That being said, the formula is showing signs of distress. When half of a season is a given waste of no movement, then why keep returning back to that same Troublemaker well? Move on, Rodriguez.

There’s a larger story to be told here and they keep treading loosely upon a much bigger world. It’s just that if you can’t get the audience to buy into the world, then why keep pushing it? Mesoamerican mythology is fascinating, especially when the show dwells upon it. What could’ve served as an ending this season feels like it was purposefully stretched to make the series run longer. How many Texas Rangers are left in this world to make that possible?

Tom Savini was a fun addition to the show this year, but I miss the calm control of a Don Johnson, Jeff Fahey or Robert Patrick to keep the action on track. Check it out, if you’re a fan.

0 0
Previous ArticleAndersonVision wants you to Fandango on Valentine’s Day! WIN AN AWARDS SEASON GIFT CARD!Next ArticleDOWN ON THE FARM