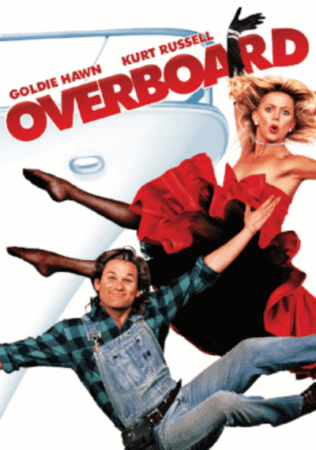 Overboard came out 30 years ago this past Saturday. I wasn’t going to post anything about it, but apparently this film is a cult hit among the ladies. Somewhere between Grease 2 and Overboard, I’ve lost all sense of female film fandom.

OSCAR®-Winner* Goldie Hawn and Kurt Russell team up for this “warm and funny” (Roger Ebert, Chicago Sun Times), “hilarious and touching” (Time Out Film Guide) comedy. While her yacht’s stuck for repairs in a small Oregon town, spoiled socialite Joanna Stayton (Hawn) hires local carpenter Dean Proffitt (Russell) to remodel her closet…but then refuses to pay him. So when she accidentally falls overboard and loses her memory, Dean takes his one chance for revenge. Claiming she’s “Annie,” his old ball and chain, the hunky widower makes her work off her debt by taking care of his house and four unruly children in this laugh-out-loud funny, riches-to-rags romance!