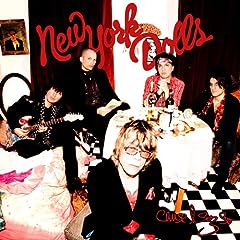 The New York Dolls have reunited with Todd Rundgren, producer of their influential 1973 debut, to record their fourth studio album, ‘Cause I Sez So, on Atco Records. Recorded at Utopia Sound Studio in Kauai, Hawaii, the album features original Dolls David Johansen (vocals) and Sylvain Sylvain (guitar) plus Steve Conte (guitar), Brian Delaney (drums), and Sami Yaffa (bass). The 12-song track list features 11 original compositions, including the first single ‘ ‘Cause I Sez So’ and a new version of ‘Trash,’ which was on their 1973 debut album. ‘It was amazing working with Todd again, and I think we were able to evoke the special sound of our first album and drag it by the hair into the present,’ says frontman Johansen..

Regardless of the lineup, the New York Dolls still kicks some proverbial music ass, especially as the six members champion on with their fourth studio album, Cause I Sez So. After all, where would the band be if lead singer David Johansen abandoned the band? The answer is nowhere. Johansens contributions are the glue that holds the Dolls together. He has always been the backbone of the group and Cause I Said So proves just this once again. Though Johansens vocals have always been quite throaty and brash, over the years, time has only intensified his signature sound. On record, his voice is pure vintage whether he is shouting on rock anthems (Cause I Sez So) or attempting tenderness (Trash). Come to think of it, at times, he sounds almost like Tom Waits.

Given the pervading dirty guitar riffs and fist-pounding refrains, its not uncommon to hear echoes from the past members. However, this new material proves the aging New York punkers are no one-trick pony. Cause I Sez So is a fresh winner produced by longtime music pal Todd Rundgren and one that explores various styles ranging from blue-eyed-soul, melodic pop, muscle rock, and, of course, a little punk action. Its no wonder that the band has influenced so many great acts over time like the Sex Pistols, The Ramones and Blondie.

When the album was first announced, I was hestitant. But, it’s a better reunion album than I was expecting. Still, it’s not their most solid work and tracks like Drowning leave one wondering why they sound like a cover band and not the real deal. However, I recommend the CD. It’s not the first disc I would suggest, but a possible additional buy.