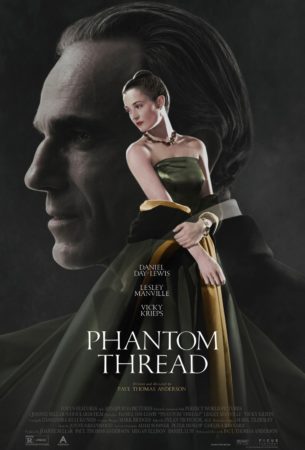 Benji on Blu-ray & The Kids In The Hall Complete Collection DVD in February! 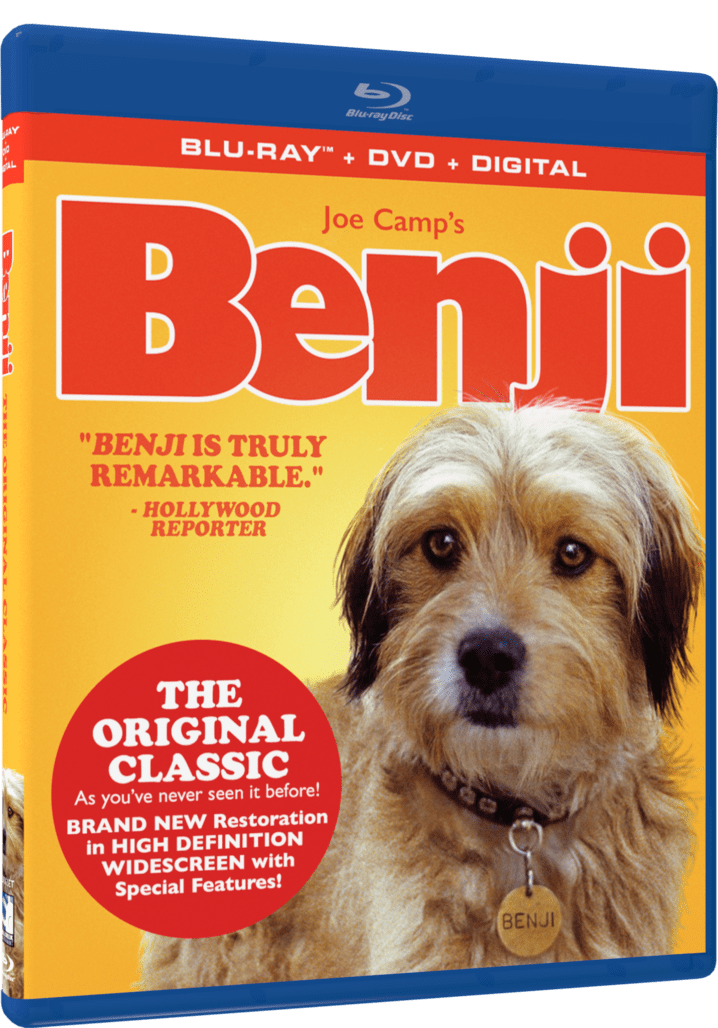 The movie that catapulted Benji into international stardom. A unique motion picture all told from the heart and soul of a dog.

Benji is the gripping story of a vagabond dog struggling to communicate something he’s seen to humans. Humans who need to know but cannot grasp the concept that a dog could possibly help. A story of frustration and persistence, of love and suspense. And the first time ever that a dog has actually acted on the screen. Expressed emotion. And done it so very well that we, the audience, completely understand everything Benji is thinking and doing, every turn and twist, without a word of dialog being spoken.

Exclusive Engagements
For more information, please visit http://www.phantomthreadtickets.com/
Set in the glamour of 1950’s post-war London, renowned dressmaker Reynolds Woodcock (Daniel Day-Lewis) and his sister Cyril (Lesley Manville) are at the center of British fashion, dressing royalty, movie stars, heiresses, socialites, debutants and dames with the distinct style of The House of Woodcock. Women come and go through Woodcock’s life, providing the confirmed bachelor with inspiration and companionship, until he comes across a young, strong-willed woman, Alma (Vicky Krieps), who soon becomes a fixture in his life as his muse and lover. Once controlled and planned, he finds his carefully tailored life disrupted by love. With his latest film, Paul Thomas Anderson paints an illuminating portrait both of an artist on a creative journey, and the women who keep his world running. “Phantom Thread” is Paul Thomas Anderson’s eighth movie, and his second collaboration with Daniel Day-Lewis.

Shout! Factory, a leading multi-platform entertainment company, unveils the launch of its new weekly podcast, Shout!Takes, today. Hosted by Shout! Factory’s Brian Ward, Shout! Takes grants pop culture enthusiasts a listen to in-depth interviews from some of the people behind fan-favorite movies and TV series.
The initial lineup of guests includes Jeff Goldblum (Into the Night), John Lithgow (Adventures of Buckaroo Banzai, Raising Cain), Peter Dinklage (Living in Oblivion), Steve Buscemi (Living in Oblivion), Rob Reiner (Misery), Lena Khan and Megha Kadakia (The Tiger Hunter),  Megan Ward (Dark Skies)and many more.
Shout! Factory, long known for its award-winning bonus features, launches Shout!Takes as an opportunity for fans to hear the raw, mostly uncut interview footage only previously heard as edited documentaries and featurettes on favorite Shout! Factory and Scream Factory releases. New episodes will be available each Friday wherever podcasts are found.
December 2017 Episode Schedule:
Episode 1 – Jeff Goldblum
It’s our extra special, extra-long inaugural episode of Shout!Takes and we’re kicking it off with Jeff Goldblum. And you don’t get much more “Goldblum” than this interview, recorded for the Blu-ray release of Into the Night, a film by iconic director John Landis; starring Goldblum as Ed Okin, an insomniac who, upon discovering that his wife is unfaithful, embarks on an adventure with a beautiful, mysterious young woman (Michelle Pfeiffer)! The movie’s absolutely fantastic, but this rare interview with Goldblum is a legitimate treat. Join us as he meticulously reimagines his character for today and regales us with tales of a young Jeff Goldblum (circa 1985), finding his way in Hollywood!
Now available:
http://shouttakes.libsyn.com/episode-1-into-the-night-with-jeff-goldblum

AT&T* Hello Lab, a slate of original entertainment created by, for and with Millennial and Gen Z audiences, will debut five short films as part of its Mentorship Program on DIRECTV NOW on December 1, 2017. The Program is a new initiative that brings together entertainment industry leaders with aspiring filmmakers from diverse backgrounds as they create a piece of work that supports their creative vision.

Each short celebrates young adults and provides the filmmakers with a place to share their unique perspective and authentic voice.

During the year-long creative process, the filmmakers were fully supported by AT&T, Fullscreen and a group of industry advisors who counseled them on pitching their work, managing budgets and directing character-driven narratives.

More on the filmmakers:

Gabrielle Shepard: Graduated as an MFA Film and Television Producing Fellow in the Conservatory of Motion Pictures at Chapman University. She has produced films that have been programmed in the Austin Film Festival, Pan African Film Festival and Cannes Short Film Corner. Gabrielle now pursues fresh and dynamic projects to bring to life as a writer, director and producer.  She currently works in the Motion Picture Lit department at William Morris Endeavor.

Matthew Castellanos: A Mexican-American filmmaker from South Central, Los Angeles. He intends for his stories to start new discussions and shed some light on humanity. For the past two years, he’s produced and directed twelve digital television shows on artist Tyler, the creator’s network GOLF MEDIA. This August, Matthew’s first linear television show NUTS + BOLTS premieres on the network VICELAND, which he’s serving as both executive producer and director.

Neil M. Paik: A filmmaker and artist from Los Angeles. After graduating from the film school at UCLA, where he was editor of the Daily Bruin, he filmed a documentary on the ground in the Middle East analyzing diverse perspectives in the conflict zone. His short fiction films have garnered several awards while playing at festivals nationwide. Over the last three years, he has worked in development and production at Warner Bros., Color Force, and WME and as a director’s assistant.

Nefertite Nguvu: A graduate of New York’s School of Visual Arts, where she obtained a B.F.A in Film. Her thesis project at SVA won the award for outstanding screenplay. Nefertite is an award-winning writer/director and producer whose work includes, several narrative and documentary shorts, a host of web based programming, and a feature film entitled “In The Morning” which is currently available worldwide via Video on Demand.

Fullscreen Media, a next-generation entertainment company, is majority owned by Otter Media, a partnership between AT&T and The Chernin Group.

“Call Me by Your Name” won for Best Picture of the Year, it was announced today by Claudia Puig, President of the Los Angeles Film Critics Association (LAFCA).

“I am so pleased to be honoring such a wide breadth of films and filmmakers this year. The winners come from several countries around the world and reflect a diversity that should be the norm during the awards season. We’re so excited to celebrate this year’s extraordinary group of winners,” said Puig, on this year’s awards.

PICTURE: “Call Me by Your Name”
Runner-up: “The Florida Project”

DIRECTOR: Guillermo del Toro, “The Shape of Water” and Luca Guadagnino, “Call Me by Your Name” (tie)

Beyond Skyline – In Theaters December 15th 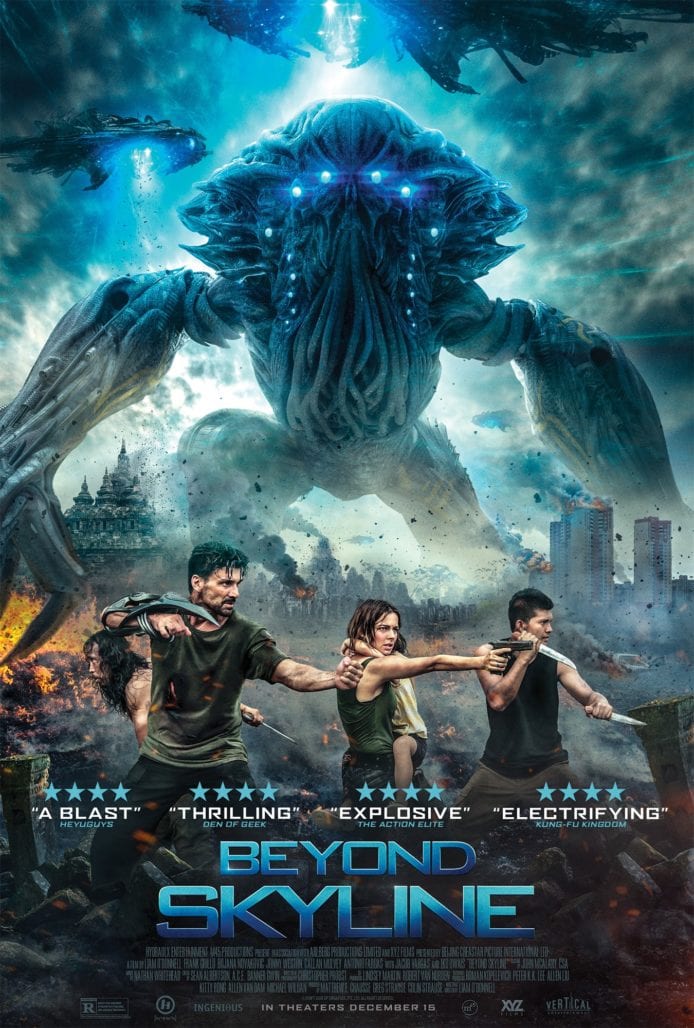 Written and Directed by:
Liam O’Donnell

When the population of Los Angeles is vacuumed off the face of the earth, Detective Mark Corley (Frank Grillo) storms his way onto an alien ship to rescue his estranged son.  But after crashing the ship in Southeast Asia, he must forge an alliance with a band of survivors to discover the key to saving his son and taking back the planet once and for all.

BEYOND SKYLINE will open in the following theaters/markets on December 15th:

This fall, Dino goes digital with THE BEST OF THE DEAN MARTIN CELEBRITY ROASTS: VOLUMES 1-3!  Never before released on any digital platform, the Roastmaster General will be available exclusively on iTunes beginning December 11, with three “Best of” compilation releases priced at $14.99; individual episodes will be available for $1.99 each.  The classic TV archivists at Time Life will release additional digital content throughout 2018 and beyond.
What originally began as one-off specials to boost ratings for his variety show, The Dean Martin Celebrity Roasts evolved into a fixture on NBC’s Thursday night lineup from 1973 to 1984.  Across those 11 years, Dean, Rat Pack Royalty, and his panel of celebrity pals successfully ridiculed, embarrassed and made fun of Tinsletown giants like Johnny Carson, Bob Hope, Lucille Ball, Jackie Gleason, Don Rickles and Martin himself, to name a few, and America ate it up!  Anybody with thick skin and a good agent was fair game, and Martin was a legendary ringleader who set the tone and encouraged the freewheeling spirit that makes these roasts still so fascinating, even decades later!
Each volume of THE BEST OF THE DEAN MARTIN CELEBRITY ROASTS features 9 uproarious episodes.  VOLUME 1 features complete and unedited roasts of Bob Hope, Sammy Davis Jr., Telly Savalas, Michael Landon, Angie Dickinson, Joe Garagiola, Peter Marshall, Joe Namath and even a roast of Dean Martin.  VOLUME 2 includes roasts of Lucille Ball, Jackie Gleason, Betty White, Ted Knight, Jimmy Stewart, Valerie Harper, Danny Thomas, Dan Haggerty and Suzanne Somers.  And VOLUME 3 features Muhammad Ali, Redd Foxx, Evel Knievel, George Burns, Dennis Weaver, Gabe Kaplan, Jack Klugman, Joan Collins and the second roast of Michael Landon.  Home viewers are sure to howl over the bashing and basting of so many celebrities by a spectacular array of the day’s top personalities.
THE BEST OF THE DEAN MARTIN CELEBRITY ROASTS: VOLUMES 1-3 joins THE BEST OF THE CAROL BURNETT SHOW, VOLUMES 1-4 also available on iTunes; and, throughout 2018, Time Life will release additional TV classics on the platform. 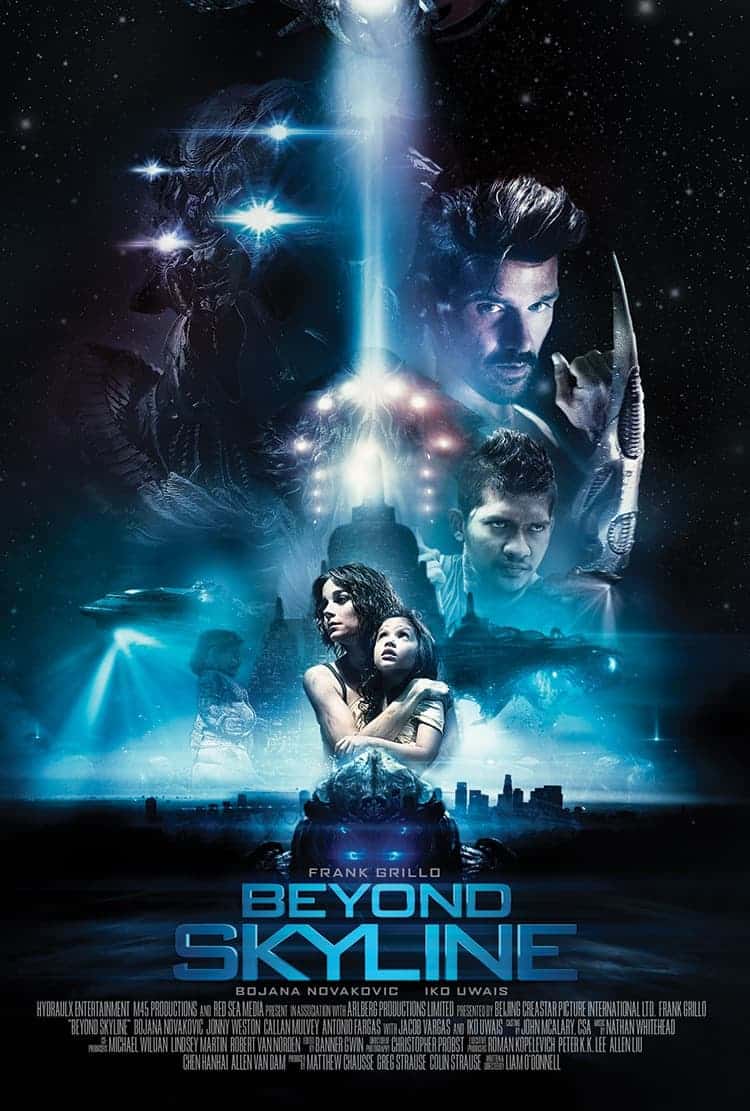