“The Hateful Eight” is a Tarantino Western released during the Christmas season to mixed reviews. Some have called it a reverse plotted “Django Unchained”, while others have adored the fixed setting. All the while, I’m obsessed with the repeated use of that one musical cue from “The Exorcist Part II”. Where do we begin? Due to overt efforts on my part, I saw the film in both the 70mm and DCP versions that have made their way around the country in the last week or so.

While the DCP version is far more intense due to tighter pacing, the 70mm is such an experience. Your dedication to film as an experience will dictate which one you choose to view. Do you really need an overture, intermission and a few extra scenes? Can you not wait for the inevitable Blu-Ray release stacked to the gills? If you’re gaining rage face from that statement, then head out to the 70mm Roadshow engagement.

The film lives and dies by its dialogue. Many viewers have had great issue with the opening 40 minutes that were dedicated to setting mood, introducing characters and inviting you into the film’s world. The vague distance from the Civil War matched with the frozen limbo of Wyoming might put some out of sorts. But, this film needs the absence of life to force you to listen to those that are actually alive. If you have trouble with period appropriate discussions of race relations, warfare and the fairer sex…you’re going to have a bad time.

Things like The Lincoln Letter matter to writers, but it’s neat seeing how a general audience responded. What’s the Lincoln Letter? It’s a plot device introduced early in the film during a conversation between Kurt Russell and Samuel L. Jackson. Jackson plays a former cavalry officer who was supposedly pen pals with President Lincoln during the Civil War. It’s only during the forced stay at Minnie’s Haberdashery that the truth comes out. The letter is a fake that Jackson uses to disarm white people, as he’s a heavily armed black man living free in the Old West. The white people stuck in the Haberdashery with him take issue to its use, as Russell is quick to snap at the Letter that he once cherished.

Tarantino seems to love every word that he’s ever written. But, we need writers that love their scripts. Building off the use of the Lincoln Letter, we see how disarming and approaching people dictates the West. Kurt Russell, Walton Goggins or Jennifer Jason Leigh can move freely about the Haberdashery, while everyone keeps their eyes on Jackson. The woman that is being taken to hang gets less grief than the black guy trying to live as a bounty hunter. Jackson doesn’t pine for a better day, as he uses the white fear of his status to his advantage. Just ask poor Bruce Dern and his kid.

Jennifer Jason Leigh is the anchor that makes the film work. I’ve been enjoying reading the early reviews from the youthful Internet sort that bemoan a woman being treated in this manner. Honestly, what did you expect? It’s the 1860s/1870s and not everyone got to be Annie Oakley or Calamity Jane. She’s playing a murderer who actively taunts her captors and tries to undermine them at every turn. Much like Samuel L. Jackson says in the film, it’s easier just to shoot her and bring her corpse back to Red Rock. Watching Leigh try to hold onto her determination, while being splattered with every innard known to 1800s science has to be one of my favorite moments of 2015.

The ghost of the Civil War haunts the film. Early in the film, Minnie’s Haberdashery has to be split into Pro Union and Pro Confederacy sides to calm down tension. But, it doesn’t end. Bruce Dern’s character is mad at the life he lost, Samuel L. Jackson wants vengeance and Walton Goggins just wants the others to understand why he did what he did during the War. Everyone demands respect for their actions, but they don’t understand each other. Throw guns into the mix and you know how this will end.

Ultimately, how important is it to disarm people? Much has been made of the film’s finale and it’s one of Tarantino’s best scenes. No one is really giving up their core beliefs, but they’re starting to understand each other. All nine people (including O.B.) have similar goals, just different ways of getting there. Thematically, it’s Tarantino’s strongest film. 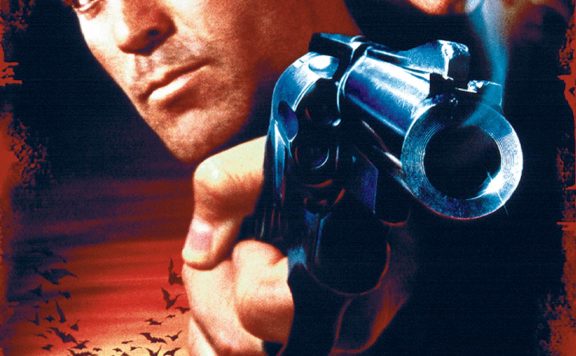