Summary
Each Dawn I Die is one of the greatest prison movies of the 1930s. Troy tackles the latest amazing Warner Archive Blu-ray release.
9
Amazing
Video - 9.4
Audio - 8.7
Movie - 8.8
Special Features - 9.1

Each Dawn I Die works on many of the popular trappings of 1930s American fiction. At the time, the rise of immigrants into America viewed journalists as the champions of the underdog. So, why not show what happens when journalists get railroaded by the legal system? Placing film superstar James Cagney in the lead creates a fantasy that leaves reality far behind. But, damn if it’s not the most amazing thing to watch. Throw in Cagney pal George Raft to help make this the most 1930s film possible.

Jimmy Cagney works his best when forced into the dirt and grime of crime fantasy. But, he shows a special kind of charming playing from behind in Each Dawn I Die. Cagney keeps his sense of self, but constantly gets beat up and targeted by others. The only person that got targeted more by prison guards was Tim Robbins in The Shawshank Redemption. But, Cagney manages because he helps George Raft escape from a courthouse and hook up with his media friends.

Unfortunately, Raft sells out Cagney for a little bit and Jimmy gets slammed with more time in the hole. Thrown into solitary, Cagney rots in the dark in chains. As months go on, Cagney starts to be corrupted by the prison experience and grows darker. Eventually, Raft is persuaded to do his part to help Cagney and this leads to a prison break-in/breakout that results in the National Guard being called out. The end result is a correcting of Justice that feels like an 8 year old put it together.

Crime movies were how Cagney made his name. But, when you do a lateral move into prison movies, things don’t translate on a one-to-one rate. You can’t act like some big tough guy with all the answers. Cagney spends most of Each Dawn I Die hoping that someone will come to his aid. It’s weird to see a big tough actor like James Cagney depending on the kindness of strangers. But, Each Dawn I Die isn’t A Streetcar Named Desire.

Each Dawn I Die went on to become one of the biggest movies of 1939. Hell, it lead to George Raft becoming a Warner Brothers contract player. But, could the film have worked at another point in time? I don’t think so, as the shadow of World War II was on the horizon. When World War II broke out, the angry and downtrodden movies gave way in popularity to War movies. Outside of Film Noir for a decade, American cinema never really got this anger back.

The 1930s are a fascinating point in American cinema and history. While The Great Depression devastated the country, we saw our cinema become a fragmented fantasy. Busby Berkeley was making crazy elaborate musicals about how grand the stage was to millions. Then, there was the rise of the crime movie. Outlaws and kingpins fighting against natural order until the Hayes Code set it right. The boundaries constructed in our fiction formed imaginary prisons to keep a restless nation in check.

So, where does something like Each Dawn I Die fall into the mix? Each Dawn I Die is a fantasy within a much-grounded reality. If anyone could get framed, then you could too. As a nation of immigrants, barely employed, unemployed and destitute citizens…America had never been more vulnerable. If World War II never happened, what would have came of a prolonged Depression and narratives flaming the anger of a displaced nation? Also, this level of angst was happening all over the globe.

Prison movies play differently than gangster movies for a reason. When you’re in prison, your power is gone. I don’t care what you saw while watching Oz. That’s an effort by weak people to impose order on others. No matter what big dog prisoner you see, they are always a misstep from getting their head beat into mush by a guard. What Each Dawn I Die was doing here was showing how the same system existed outside of the prison walls.

Cagney’s character effectively did nothing other than try to help his fellow man. He lost his months of his life and saw everyone turn against him to save their asses. Given the era, that sentiment was felt by everyone from Maine to Miami. Did they mean we had a run on investigative reporting in America? No, but the sentiment was that anyone anywhere could have their lives destroyed. It’s a scary sentiment to leave unchecked. Especially when prison movies didn’t end with a gangster figure getting gunned down.

Warner Archive delivers another winner with Each Dawn I Die. This disc is stacked with special features ranging from the classic Warner Night at the Movies presentation being ported over from the DVD. Then you get a classic cartoon, trailers and commentary. Plus, you get a Studio Blooper Reel that is quite comical. Plus, you get a radio show with George Raft. The A/V Quality is impeccable with that classic Warner Archive quality 1080p transfer. I’d recommend a purchase to fans.

Fans can purchase Each Dawn I Die at www.wbshop.com/warnerarchive or online retailers where DVDs and Blu-rays® are sold

Each Dawn I Die works on many of the popular trappings of 1930s American fiction. At the time, the rise of immigrants into America viewed journalists as the champions of the underdog. So, why not show what happens when journalists get rail...
0
Average User Rating
0 votes
Have Your Say!
Your Rating: 0
Submit
Write A Review
Genre:Crime
Rating:Not Rated
Director:William Keighley
Studio:Warner Brothers 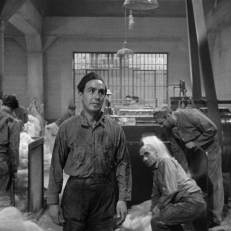 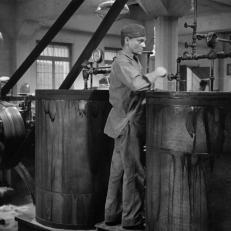 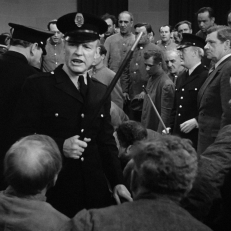 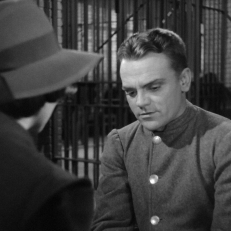 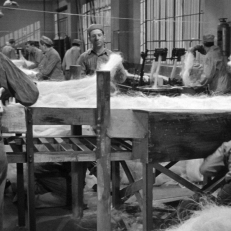 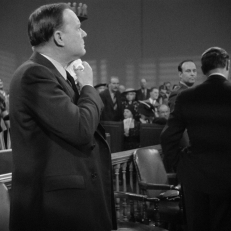