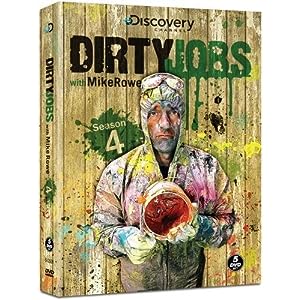 If there’s a pool of fish poop out there, Mike Rowe will find it. If there are toilets to be recycled, spiders to be milked or camels to be bred, Mike’s your man. No matter how gross, filthy or downright nasty the jobs, Mike tackles it with his unique brand of wit, charm and boyish enthusiasm. And Season 4 has some real stinkers.

Dirty Jobs: Season 4 includes all episodes from the fourth season on five discs, plus deleted scenes and the “200 Jobs Look Back” bonus episode.

This show is more documentary than reality. Mike Rowe is half the fun as the quick witted gross-host-with-the-most. Kinda like the Mr. Wizard of sewage, but more of an engineering slant on the issue. Even though I’m married to a civil engineer who took classes in sewer design, both of us are fascinated by this show and have a new appreciation for Americas’ unsung malodorous-heroes. Its not a gross out show. Really. Its kinda weird. You would think they were talking about the surface of Mars based on how little the public knows about the subjects he covers- but in reality, he’s covering technology that dates back to the Roman Empire.

Mike Rowe is funny and personable with people with whom he visits on the job; so, his humor is never at the expense of others. In fact, there is mutual jib-jabbing going back and forth between Mike and the various employees he visits. Mike has the ability to allow others to be relaxed and more themselves in front of the camera, which is another reason why this series is so successful and enjoyable to watch. The ordinary, everyday and hard-working people Dirty Jobs showcases are the real gems of the show. It gives a real sense of humanity and value to the people who might sometimes be disregarded by the majority of society. When was the last time you ever thought about the person who goes around your neighborhood in the wee hours of the morning to pick up your trash twice a week?

The fourth season shows use everything from animal rendering to working as a camel rancher. After a few seasons, you would think that it would become hard to find disgusting work. But, Mike Rowe is always on the frontline with jobs that no man should ever want to touch. I still don’t get the purpose of a worm grunter. But, I guess it’s not my place.

The DVD comes with some deleted scenes. Plus, there’s a look back at the previous 200 episodes. It’s all fun for an anniversary season, but one wonders about the mental toll it has taken on Rowe. The A/V Quality is amazingly sharp for recent TV on DVD and I recommend it for a purchase.

DINOSAUR TRAIN: UNDER THE VOLCANO

DAMNED, THE: DON’T YOU WISH THAT WE WERE DEAD