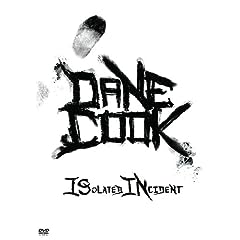 When Swiper tries to swipe the Christmas Star from Doras Nochebuena Party, he lands on Santas naughty list. To get back on the nice list, Dora must help Swiper travel to the past, the present, and the future to discover the true spirit of Christmas. Will you help too? Filled with original songs and exclusive extra scenes, this all-new Christmas special, exclusive to DVD, will become a holiday favorite for the whole family!

Cook’s new special was filmed in front of a few hundred of his rabidly loyal fans at a wholly planned production at The Laugh Factory in Hollywood. We’ll have to look at the DVD extras to see the more unusual and most likely more enlightening footage of Cook interacting with what any comedian would call a smaller crowd. But it does live up to its title of being an Isolated Incident, because Cook remains on tour performing for arena-sized audiences. Even if we learn during the Comedy Central Records special that the “isolated incident” in question refers to an unusual graphic sex act the comedian performed for an ex-girlfriend.

This new Dane Cook seems so familiar because it is a voice and a tempo that weve all heard so much, but his set has almost a novice feel to it, because for the first time in a long time Dane is writing out of his comfort zone. He hits all of the usual hotspots for young comedians: a quick dip into the hypocrisies of racism, a giggly use of naughty words, and a large chunk on the gross and funny parts of sex. He even does a little crowd work.

The DVD comes with an all-new interview with Dane Cook. Plus, you get thirty minutes of random stand-up in front of strangers. It’s funny to see how non-fans respond to Cook. He’s an alienating comedian who causes quite a weird array of response. The A/V Quality is pretty standard for Comedy DVDs, but the audio could’ve been a little more robust. I still recommend the release.