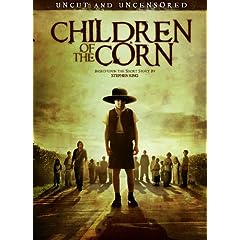 
From Donald P. Borchers comes the resurrection of the most unholy shocker of all: It’s 1975, and a young married couple – Vietnam vet Burt (David Anders of Alias and Heroes) and preacher’s daughter Vicki (Kandyse McClure of Battlestar Galactica) – are driving cross-country straight into the heartland of Hell. Here in Gatlin, Nebraska, the town’s bloodthirsty children – led by the boy preacher Issac and his teen enforcer Malachai – have slaughtered all adults by command of He Who Walks Behind The Rows. Now two new Outlanders have arrived…and The Time of Sacrifice is at hand. Preston Bailet (Dexter) and Daniel Newman co-star in this brutal and chilling re-imagining of King’s infamous take, featuring graphic footage not seen in the television broadcast.

Remakes have become so popular these days that even Syfy is doing it, with their latest picture being a redux of 1984s Children of the Corn, itself a Stephen King adaptation. (King himself receives a teleplay credit, but his actual involvement is unknown.) Donald P. Borchers, who served as producer on the original, wrote and directed the new version.

The story, not surprisingly, is the strongest element of the film. Granted, the short story is stretched a bit to far for a feature, but the tale of a town inhabited solely by religious zealot-children is an intriguing one. Not straying too far from the source material, the movie finds a couple traveling through rural Nebraska in 1975. Vietnam veteran Burton (David Anders, Heroes) and his bitch of a wife, former prom queen Vicki (Kandyse McClure, Battlestar Galactica), are having marriage troubles, but things get much worse when they happen upon the town of Gatlin on their trip.

The small, desolate town appears empty at first, but it is soon revealed that it is overrun by the local children, fundamentalist Bible-bumpers who worship He Who Walks Behind The Rows. The group is lead by Issac (Preston Bailey, Dexter), a young boy to whom God directly speaks. He orders the kids to sacrifice adult sinners to protect them. Further, the children must be sacrificed upon their 19th birthdays. Much of the dirty work is done by Malachai (Daniel Newman), the second in command who is nearing his time of sacrifice. The first half of the film is fairly promising, but once Burton starts going Rambo on the kids  as fun as that sounds (and it is)  the movie goes steadily downhill.

The acting is all uniformly terrible. It’s by the numbers. The only actors who seem to be trying are the possessed kids, but the problem with that is they come off more like petulent brats then malevolent demonic entities. Sorry, I’m almost convinced that this King story can’t be served well on the screen ever. His main villains are small children. Child actors just can’t pull off the kind of otheworldly malevolence in any believable way. Sure, they look cute and they’re doing nasty things, but one never buys that they are truly evil, but more of a cheap horror effect. Nothing gets to the more simple minded viewer faster and easier then showing a cute kid with a blank stare doing something awful. It’s cheap scare tactics that don’t even work.

The DVD is loaded with featurettes about the production. There are a ton of interviews with the actors involved in the remake. The A/V Quality is mixed, as there is a ton of digital noise on the print with a lot of tinny audio throughout the film. The commentary with the new director is semi-interesting. But, it lacks any real observation on the religious tones of the film or the King influence. It’s a rental only for the curious.

CAREFUL WHAT YOU WISH FOR

CAILLOU: GOES FOR THE GOLD