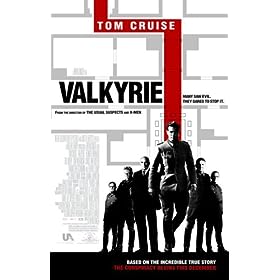 Director: Bryan Singer
Writer: Christopher McQuarrie and Nathan Alexander
Cast: Tom Cruise, Terence Stamp, Kenneth Branagh, Eddie Izzard and Bill Nighy
Studio: United Artists
Release Date: 12/25/08
It is relevant that it has taken this long for the story to be turned into a movie made by Hollywood. Its very existence does tell us that the rest of the world has perhaps finally forgiven the German people for this horrible period in human history, because, as it says in the movie, the story does prove that not all Germans were bad.

Although I am not a fan of Tom Cruise, and find some of his movies to be pure junk, I thought he did a great job in this movie. The real Count Claus von Stauffenberg was a handsome, charismatic individual and was not that different in appearance from the screen version portrayed by Tom Cruise.

The attention to period detail, and the historical accuracy of what was depicted in this movie, including all the tiny little details squeezed in to show why the bomb explosion failed to kill Hitler (the list includes – the unexpected move of the meeting from the tightly enclosed bomb-proof shelter, which would have magnified the explosion internally, to the outside conference room with the opened windows that helped disperse the energy of the explosion; von Stauffenberg’s inability to arm both blocks of explosives; and the final accidental re-positioning of von Stauffenberg’s bomb containing briefcase against a table leg, which blocked the force of the explosion away from Hitler).

The plot moves along briskly, and even though we know how it will all turn out, there is still considerable suspense. People have complained that no background is ever given as to why von Stauffenberg turned against Hitler, but this is not entirely true, as von Stauffenberg’s own words are quoted at the beginning of the movie as to why he was turning against his oath of loyalty to Hitler. That the loyalty oath which was one of the first things displayed in the movie was to one man, and not to the nation as a whole, should be evidence enough of the diabolical nature of Hitler’s regime.

We see von Stauffenberg with his lovely wife and children, and we see the enormous burden that he feels in placing his family at risk for getting involved in this plot.

As for complaints about Cruise’s flat American accent, well, why not? Hearing him speak in the same stuffy Received Pronunciation English as the other members of this terrific ensemble cast of mostly British actors would have been ridiculous. Even more absurd would have been having him do the usual “Hogan’s Heroes” sort of German-American accent.

All in all, this is a very well made movie by Bryan Singer, and Cruise does a terrific job in his role as one of Germany’s true martyr-heroes from the Nazi era, treating von Stauffenberg with nothing but the utmost respect (i.e., none of the usual trademark Cruise theatrics, such as his toothy grin, ever appear as Cruise does his level best to disappear into his character for once).

The movie is a sad reminder of the enormous courage required to stand up to a truly evil, totalitarian regime, and of how few people would be able to make these sorts of decisions and sacrifices. That any did so at all, and that so many Germans did so, should stand as both a testiment to their courage and the innate decency of humanity in the face of utter evil.