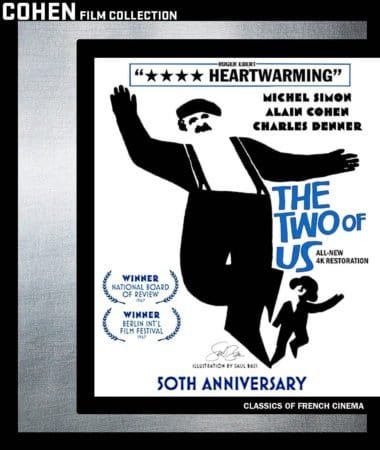 THE TWO OF US REVIEWED

“The Two of Us” made me appreciate Michel Simon. This film celebrated a 50th Anniversary release recently and something about has struck me funny. Hell, it might be the first film that tried to present Nazi sympathizers in a realistic light. Michel Simon plays Grandpa, one half of an elderly couple that takes in a Jewish child during World War II. As the War ends, the older couple starts to realize that they were caring for a Jewish child. But, how do people in Vichy handle life after the Allied liberation?

Grampa refuses to recognize the new leader of the unified France or address his antisemitism. After all, he blames the English and Communists for fueling Hitler’s rage. While he eventually tries to rationalize his hatred of Jews, he has to address the little person living with them. For ages, he thought this was a child sent away from the crime in unrestrained Paris. Now, he has to understand what makes him a kind grandfather figure and what makes him a puppet for the racist garbage that nearly destroyed the World.

Terrific stuff all around and Alain Cohen delivered one of the most underrated kid performances of the last 50 years. I recommend picking up The Two of Us, as soon as you have the chance.

0 0
Previous ArticleAWESOMES, THE: THE COMPLETE SERIESNext ArticleORANGE IS THE NEW BLACK: SEASON FIVE