Created by and starring Canadian comedian Nathan Fielder as an unorthodox small business consultant, the unconventional Comedy Central series Nathan For You has become a pop-culture touchstone with segments such as Dumb Starbucks and the viral video of a pig saving a drowning baby goat. On November 10th, Shout! Factory will release the irreverent docu-comedy series Nathan For You on DVD for the first time.

Nathan Fielder helps real small businesses turn a profit with marketing tactics that no traditional consultant would dare attempt. Whether it’s creating a coffee shop called Dumb Starbucks, inventing a poo-flavored yogurt or staging an elaborate viral video where a pig saves a goat, no idea is too daring. While Nathan’s efforts may not always succeed, they always have big results.

Nathan For You Bonus Features

Available on-air, online and on-the-go, Comedy Central (www.cc.com) is the #1 brand in comedy and is owned by, and is a registered trademark of, Comedy Partners, a wholly-owned unit of Viacom Inc. (NASDAQ: VIA and VIAB). For up-to-the-minute and archival press information and photographs visit Comedy Central’s press web site at press.cc.com and follow us on Twitter @ComedyCentralPR for the latest in breaking news updates, behind-the-scenes information and photos. NATHAN FOR YOU: The Complete Series comes to DVD December 11th
October 10, 2018 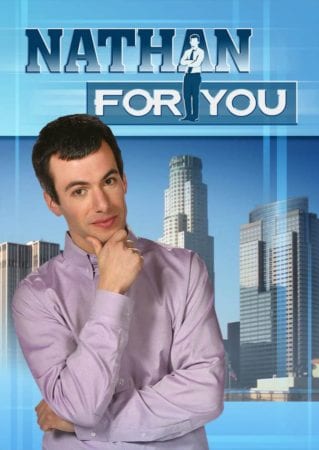 Enter to win a DVD copy of Nathan For You: The Complete Series
December 23, 2018