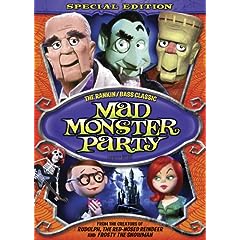 Baron Von Frankenstein (voice of Boris Karloff) has decided to retire as the head of the Worldwide Organization of Monsters. But first, he must inform the other monsters about his plans. How to deliver the news? How else – through a MAD MONSTER PARTY! Von Frankensteins guests include a whos who of Halloween favorites, including the Werewolf, Dracula, Dr. Jekyll and Mr. Hyde, the Mummy, the Invisible Man and more. But who among them is fit to be the new head of the monsters? Find out in this treasured stop-motion classic from the team who brought you “Rudolph, the Red-Nosed Reindeer, “Frosty the Snowman and other beloved holiday specials.

Boris Karloff provides the voice of Dr. Frankenstein, who is so excited about creating his latest monster that he throws a party and invites all his monster friends to his castle for his shindig.  That means Dracula, Wolf Man, Dr. Jekyll (he brings Mr. Hyde with him), the Invisible Man, the Hunchback, The Mummy and the Creature from the Black Lagoon are all under one roof and theyre ready to party.  Tensions arise however when Frankenstein announces hes handing his experiments over to his nerdy nephew Felix, which doesnt sit well with some of the monsters, who try to do away with him.

If youre like me, then all you need to hear is the words Rankin-Bass and Boris Karloff to be completely sold on this flick.  The animation is suitably tacky and theres also a great Shirley Bassey style theme song in there too.  The film is also filled with some truly priceless puns such as:  My sister was the white sheep of the family, Now youll discover who was the original Batman!, and Youre my type!  O-Negative!

All of the finer points aside, Mad Monster Party really shouldve been an hour long TV special and not a feature length movie.  It wouldve benefited from some tighter editing, less annoying supporting characters, and fewer songs.  Phyllis Diller, the only other star vocal talent in the cast, isnt as grating as she normally can be but she doesnt really bring a lot to the film.  Having said that; Mad Monster Party for all its faults is still pretty irresistible.

The DVD comes with a handful of new special features. There’s a ton of featurettes and 2 new sing-alongs. Plus, there’s the original trailer from the film’s 1967 release. Couple that with an amazingly transfer that might make you upgrade from the previous OOP Anchor Bay release. I’d recommend it as a cautious buy.

ENTER TO WIN A COPY OF “PRIVATE PRACTICE: THE COMPLETE SECOND SEASON”

MAGICIANS, THE: SEASON ONE