This past weekend, Marvel TV Production Head/former X-Force writer Jeph Loeb was grilled again by casting Iron Fist as a white guy. While the easiest answer is because of the source material, other fans and outlets have questioned the decision. Then, yesterday on Social Media Justice Court, things started to go haywire. Heavy accusations flew against a legendary content creator with a well-established online fanbase. That’s right, kids. People got mad at Rob Liefeld on Twitter.

Help me out with what you would call making a white character of 40 years into an asian one for reasons of diverse casting only. https://t.co/WNe52hGWQG

Iron Fist’s origins begin in a very Marvel one-off style that was riffing on Lost Horizon. As later Iron Fist series would reveal, young Danny Rand was always destined to be the Iron Fist. His father was an outsider that made it into the Asian-heavy otherworld community and was adopted one of its leaders. When Wendell Rand was cast out of the city of K’un-Lun, he dreamed of returning one day. When Danny was 9, the Rands attempted to return to Wendell’s childhood home, but was stopped due to nefarious plans. The now orphaned Danny Rand was adopted by K’un-Lun and apprenticed to Lei Kung the Thunderer.

So, what did he have to be Caucasian? The freshman Poli Sci/Sociology double major will scream it’s because of where Marvel was in the early 1970s. That’s not entirely wrong. Martial Arts and Blaxploitation were driving a lot of comics and films back then. Plus, Lost Horizon just came back into the popular consciousness as rather expensive musical bomb. There was an allure to a white outsider partaking in events that weren’t open to him. Remember that in this era, the average reader wasn’t seeing kids doing Judo at suburban Dojos across the country. Martial Arts were reserved to big city training centers and foreign locales of mystery. That was until Bruce Lee and the Bay Area Kung fu scene.

While Bruce Lee spent his training years in the 1960s opening up Martial Arts to Caucasians and Westerners, most of that was forgotten by Iron Fist’s debut in 1974. Bruce Lee had been dead for about a year. Plus, he was better remembered as a TV and Film star in the 70s. What many tend to overlook is what began his recognition in America. Lee wanted to train non-Chinese in Kung fu. Click here and here for additional background on Lee’s early days. You might see the goofy pictures of Lee sparring with James Coburn or Kareem, but it goes beyond that.

Lee knew the novelty of the West and general whiteness getting to be the Other or minority force. Business exists when you can open a venue for an untapped market and get them to buy into what you’re selling. Well, Kung fu in America took years to take off. Bruce Lee’s first school folded and students were generally scarce. It wasn’t even until way after his death and the launch of books like Iron Fist that white kids saw Kung fu as something they wanted to learn and adopt.

Can we talk about Iron Fist and Luke Cage now?

Luke Cage and Iron Fist finally came together in Power Man and Iron Fist #50. It was a smart move on Marvel’s part to save two books that were floundering in sales. Iron Fist was also losing its creative team to Uncanny X-Men, but that’s not the point. As our story opens, Luke Cage is celebrating with his friends in Jeryn Hogarth’s office. Cage has just been cleared of the false charges that imprisoned him at Seagate Prison. That doesn’t stop two bounty hunters from trying to take Luke down for his imagined crimes.

Iron Fist and Luke Cage fight the bounty hunters, but Detective Rafael Scarfe gets shot in the chest. This causes Misty Knight to rage out and have to be stopped by Cage from shooting a bounty hunter in the face. It turned out that the bullet only hit Scarfe’s badge. Things are hunky dory, as the villains get taken away by the cops. The issue ends. Oh yeah, before the issue ends…Luke Cage breaks up with Claire Temple. Claire won’t be seen again for 2 more years in the book. After that, a brief Marvel Team-Up appearance and then nothing would follow for decades. The character has recently returned to the Marvel Universe due to Rosario Dawson’s success with the character in the Marvel Netflix TV Universe.

You still haven’t answered why Iron Fist needs to be white.

Well, nobody needs to be anything. If you can’t accept that we live in an era where fluid identity is finally being understood, then you’re going to have a hard time with deep narrative research. That being said, Danny Rand as Iron Fist is served better as a white outsider. Why? Well, mainly due to the impact of American history on the character’s creation and reception. For many future American Caucasian students, Danny Rand was their entry point to martial arts. The Asian world had IP Man, Bruce Lee and eventually Sammo Hung. The African American community had Jim Kelly.

At the time, Danny Rand was selling outside newness to a heavily White audience that was fleeing to the suburbs and flipping school buses to stop integrated bussing. Pairing a white hero that was able to use a secretive Asian art with a strong African American hero showed racial unity in a rather peach colored field. Could it have been better now and then to use an Asian hero? Sure. But, the story angles for Cage and Rand would’ve changed dramatically. From a narrative standpoint, what sells better and sounds less pandering? Asian superhero martial arts master patrolling NYC with his super strong black friend? Or does this sound dramatically more interesting? A formerly wealthy trust fund kid returns after being considered dead for years. His privilege and social status are revoked, as he works with the hero of Harlem to find his new place in the world.

There have been several Asian Iron Fists, pick up the books. Hell, take a chance to marvel at the beauty that is Fat Cobra. While it’s easy to be a social media attacker, take a step back and view how history (fictional and/or otherwise) can be inverted to change societal roles. It’s been said before and needs to be said again. Chill out, people. Marvel has got this. 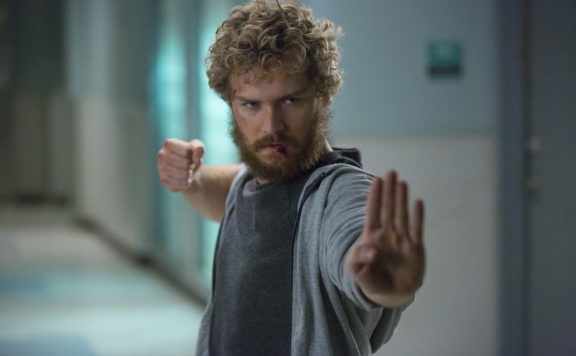