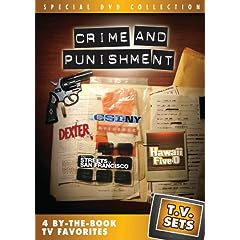 The Showtime series Dexter has an irresistible hook: The eponymous hero, a “blood-spatter analyst” for a Miami homicide unit, is a serial killer, but he reserves this inclination for scum-of-the-earth typesmurderers, pedophiles, rapistswho’ve beat the system. What makes his “code” fascinating, at least in the first several episodes, is the implication that he needs to kill, and that the code is just the most constructive way to channel his aggression. Unlike a garden-variety vigilante, he doesn’t really care about justice, which makes him a different kind of monster, one whose sense of right and wrong is programmed, not instinctive. Throughout the engrossing, tightly plotted first season, the code gradually starts to rewire his twisted circuitry, and he shows signs of making a Pinocchio-like journey toward becoming a real boy.

The definitive television series using this beautiful setting is without a doubt the long-running crime drama Hawaii Five-O, starring Jack Lord as Steve McGarrett, head of an elite branch of the state police. The series made its debut in September of 1968, and was a top ten hit in the Nielsen ratiings from the get-go, thanks in part to the great title theme by Morton Stevens, which was a big hit for the Ventures that fall.

“CSI:NY” doesn’t fit the mold of the first two series. First off, the characters aren’t just scientists. They are full-fledged cops, carrying guns and badges along with their test tubes and goggles. Secondly, it would be hard to find a person who doesn’t have at least some knowledge of New York City, whereas the other two series have something of a foreign, almost exotic feel to them. “CSI:NY” is street-level and…well…New York. It’s that feel that only the Big Apple has, and the show captures it well. But without the flash, the series can seem a bit staid in comparison to Grissom and Caine’s crews.

If the series’ glamour doesn’t stand up to that of its brethren, the acting likely exceeds it, starting with Gary Sinise (Forrest Gump) as Detective Mac Taylor. Sinise’s character, who was widowed thanks to 9/11, has the no-nonsense personality that the show needed in the lead. While Grissom’s sense of humor and humanity are proper for the lighter mood of the Las Vegas team, New York is grittier and required a CSI who could go nose-to-nose with the city’s underbelly.

When watching vintage television, you expect details like music and fashion to be dated. In the case of this series, which ran for five seasons in the 1970s, its not fair to call foul on the disco-tastic soundtrack, the pointy collars, and a profusion of greasy mustaches.

The difference between good vintage television and bad vintage television, however, is characters and plot. Well-told stories never go out of style. They allow us to overlook all the tinted aviator glasses and forget to point out that our heroes could have solved the case a lot faster with cell phone and a computer.

The Streets of San Francisco gets the formula half-right. As detecting duo Mike Stone and Steve Keller, Karl Malden, and Michael Douglas have a nice, laid-back chemistry. Stone is the crusty veteran with a marshmallow center, while Keller is the young rookie who makes all the girls swoon. Malden manages to convey authority and experience, with enough fedora wearing and nickname dropping (buddy boy ace) to lend the character an endearing folksy exterior.

The DVD is a decent compilation for some of Paramount’s best shows. What kills me is the utter lack of special features. Hell, there could at least be some supplements to inform new viewers about similar shows. Nevertheless, the disc just gets dropped in your lap. Still, I’d recommend it for a rental.