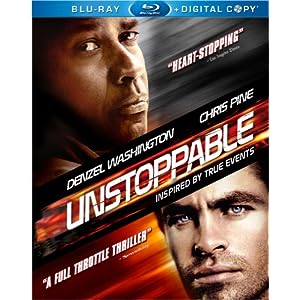 With an unmanned, half-mile-long freight train barreling toward a city, a veteran engineer and a young conductor race against the clock to prevent a catastrophe.

“Unstoppable” is based on the CSX 8888 incident of 2001, in which a freight train ran amok and unmanned across the state of Ohio for two hours. Here the setting is switched to Pennsylvania and it’s running at such high speeds that it threatens to destroy Stanton should it derail itself on an elevated railway and smash its toxic cargo. Of course, for the conventions of the action/escapism movie plot, we’ve got two troubled heroes who are just going through the motions of their not-so-happy lives when they assume the Superman personality and race against time to stop the train.

Denzel Washington’s Frank Barnes is a seasoned engineer and 28-year AWVR veteran who never shows any of is his inward concerns, whether they be about job security in downsizing times or worry for his two daughters working their way through college. Denzel’s Barnes is all about the j-o-b and doing it right. Chris Pine’s Will Colson is relatively new to the ranks of conductors. Rumor in the yard is that Colson’s a beneficiary of union boss nepotism. Will’s also got domestic problems at home that distract him from the job. This sets up professional tension when Barnes are Colson are paired to crew AWVR1206 for a routine run. Although Barnes has seniority, Colson’s technically in charge. Pine & Washington have a lot of tension-cutting fun with this.

Tony Scott instead stresses the magnitude of the occasion in repeated failed attempts at halting “The Beast”, each and every attempt highlighting the destructive force of the locomotive at that weight and at that speed. Choosing to film the high-octane action sequences in a more straightforward realistic manner than his usual flashy visual style also lends the proceedings an authentic and an altogether genuinely riveting feel, further underlining the gravity of their heroic act. Special mention goes to the sound design of the film, which in a proper theatre with good sound system will set the hall rumbling with the sound of the locomotive.

Because much of the focus of the film is on “The Beast”, more screen time seems to be dedicated to the train than to our two lead actors, Denzel Washington and Chris Pine. Still, the ever-reliable Denzel Washington delivers a low-key but no less commanding performance as the dutiful railroad worker Frank. He also shares a nice buddy chemistry with Chris, and it’s interesting to watch how the initial tension between the two gives way to mutual cooperation, understanding and finally respect.

The Blu-Ray comes with a commentary from the director, tons of featurettes and a digital copy. The real star of this disc is that impeccable 1080p transfer. I was floored by the level of clarity presented throughout the film, as I’m still trying to get over Scott’s muddy turn with “Domino”. The DTS-HD 5.1 Master Audio is not to be undersold either. While the film’s sound design didn’t win the Oscar, it does show off why it got nominated. In the end, I’d recommend a purchase.