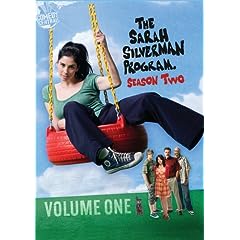 The reigning queen of political incorrectness and inappropriate humor, comedienne and actress Sarah Silverman, returns with a second season of her irreverent, critically acclaimed Comedy Central series. Highlights from the second season include a mix-up leading to Sarah joining a radical anti-abortion group, a cultural debate that finds Sarah donning blackface and Sarah finding herself in a sexual relationship with God.

This is definitely not a show for everyone and it has nothing to do with how well one’s sense of humor is developed. There are simply a lot of absolutely terrible moments in these episodes to go along with some hysterically funny ones. If you can filter out or ignore the bad and merely focus on the good, this is a show you will either partially enjoy or consider a masterpiece. But if you can’t filter out the bad or if you obsess over the bad to a degree where you can’t appreciate the genuinely funny bits, then you could well consider this to be one of worst shows ever concocted.
That being said, it is still an extremely entertaining piece of television. Though she is not very old, Sarah Silverman has been a big name in the world of Comedy for some time now. This show is great evidence as to why that is. She has such a great, innocent delivery to every joke she tells. She takes the silly, raunchy, innane and completely inappropriate and uses it to make us love her. Though I would never actually call her style “genius,” it is very winning. She takes taboo and pushes it in our faces. She takes comedic risks, which truthfully don’t always pay off, but usually do in this particular program. I commend her for being able to take her outlandish style and tone it down enough to be cable-tv friendly.
The DVD is weird, because it’s a half-crap of a season before the WGA strike hit. I wanted more and this pumped up two disc set is really a single discer. I wish that more special features would’ve been included to help beef this set up. Oh well, what can you do? It’s a rental, that’s almost a buy based on the Blackface episode alone.