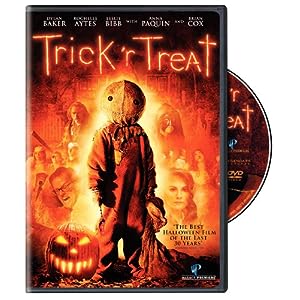 Four interwoven stories that occur on Halloween: An everyday high school principal has a secret life as a serial killer; a college virgin might have just met the one guy for her; a group of teenagers pull a mean prank; a woman who loathes the night has to contend with her holiday-obsessed husband.

Borrowing a visual style from the classic EC horror comics, director Michael Dougherty deploys vintage on-screen graphic call-outs like “Later” or “Meanwhile” to let the audience know which scenes are running in order, concurrently, or previously in the film’s timeline, which comes full circle at its conclusion, ending where it began. “Trick ‘r Treat” is a horror anthology which interweaves tales that all take place on Halloween night, similar to such genre classics as Creepshow and Tales from the Darkside. A costumed couple learns to respect tradition the hard way, a group of girls head out into the woods for a “howling” good party, the local school principal has a taste for blood, four kids attempting to pull off a holiday “trick” end up becoming “treats”, and a cantankerous old man gets a visit from a holiday visitor looking to settle a decades-old grudge.

To say anymore than that would spoil the fun in watching the film, as these stories are best digested when viewed on an empty mind. The twists are less predictable than most horror films manage these days; half the fun is wondering just where the hell these characters are going to end up. The one constant throughout the film is a costumed, pint-sized little guy named Sam, who does his best to remind people why they should take great care in adhering to the traditions set forth hundreds of years ago for All Hallows Eve.

The DVD is a quick twenty-seven minutes in length, but I don’t get why it’s being released without any major push for the feature “Trick ‘R Treat”. Actor Brian Cox narrates the look behind the scenes of the cult anthology, where we get looks at Anna Paquin and Dylan Baker. There’s even some breakdowns of Brian Cox’s battle with Sam. Still, this feels like a DVD special feature and not a standalone release. What’s going on, Warner Brothers? Oh well, if you haven’t seen the film yet…I’d recommend a blind buy. You can pick up the Blu-Ray for 10 bucks at most online retailers.