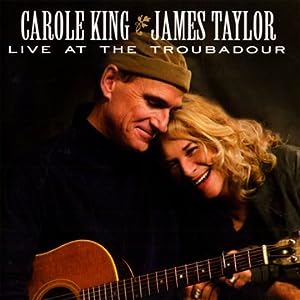 In November of 1970 James Taylor and Carole King first performed together at the Troubadour on Santa Monica Boulevard in West Hollywood, California. Taylor had just released his debut album for the Beatles’ newly formed Apple Records and King was finding her way as a first time solo performer even though by then she was a famous songwriter with a string of hits for other artists. When they returned to the club for a two-week co-headlining run in 1971 their lives were somewhat different. That summer Taylor’s “Fire and Rain” was topping the charts and King’s landmark Tapestry was on its way to making her a music superstar. Thirty-six years later, in November 2007, James Taylor, Carole King and members of their renowned original band “The Section” (featuring guitarist Danny Kortchmar, bassist Leland Sklar and drummer Russell Kunkel) returned to the Troubadour for a three-night, six-show run to celebrate the venue’s 50th anniversary. Those historic shows are documented in Live at the Troubadour, a special 2-disc CD/DVD. This remarkable recording, culled from these unforgettable shows, features 15 songs and 75 minutes of pristine video and audio including stunning performances of the pair’s most beloved hits such as Carole King’s “So Far Away,” “It’s Too Late,” and “Will You Love Me Tomorrow?” as well as James Taylor’s “Carolina in My Mind,” “Sweet Baby James,” and “Fire and Rain,” to name just a few.

In the album’s liner notes, Taylor states: “The Troubadour in 1971 wasn’t the beginning, but it was a big step into the light for both of us. When we reunited for the Troubadour’s 50th Anniversary celebration in 2007, it felt like yesterday. It was, and still is, all about the music and the celebration of performing together.” King adds, “What’s even more remarkable is that James’s and my musical connection and friendship continue to transcend time and place. Whenever we’re together, there we are. I feel a tremendous gratitude to be able to share this experience with James, with this fine band, and most of all, with the fans.”

The performances are fantastically excellent and the music is beautiful beyond the all words. One will find their eyes fill with tears of joy and tremble with excitement as these two incredibly talented artists touch the very soul of the listener. It is a uniting of giants, of legends, of titans that stand astride the history of music. Their individual stylings mesh yet contrast, amplify and compliment, enhance and charm. But it is more than that. This is a moment in music history caught forever electronically so that it may be treasured for many generations to come. In this way, the art will live forever, long after the artists themselves have passed into the mists of time. However, when one produces the rythmic soundings of angelic choirs, there can never be a passing, only a journey that the listener takes with these artists as they perform that which is familiar but new, an echo from the past yet a glimpse of the future, for this is music that will live forever in the hearts of those who appreciate that which is a priceless gift from the genius of these masters.

Carole King hearts James Taylor. It’s all over her face as she harmonizes or just mouths the words to his songs. But then, she’s hugely emotional as a signature. Her songs are hits in large part because she’s brilliant at distilling deep feelings into simple statements — “You’ve Got a Friend” is the gold standard — and excitable as a musician. When she gets going, she’s off the piano bench and playing standing up.  The news flash on James Taylor, who has always seemed too accomplished to break a sweat, is how intense he is as a guitarist. King looks at Taylor, Taylor looks down at his guitar — that unbalances the film until you get used to it, and then you have a fresh appreciation for him as a musician. It’s the voices and harmonies that mattered when we first heard King and Taylor. The years have been kind to them. King’s voice was always a little weathered, and that, for her, was a strength — now, after failed marriages and whatever else life has slung at her, that roughness seems like the proof of experience. Taylor, a great singer in his 20s, is now a master; if you can hear a flaw, you’ve got better ears than I do.

The CD/DVD combo pack is an impressive way to celebrate the Troubadour’s 50th anniversary. The DVD section is pretty standard for these live events. It’s basically a decent three camera touch-up that allows use full coverage of the multi-night performance. There’s overlap between songs on the CD and DVD, but it doesn’t matter. You’re getting the best of King and Taylor offered up in one package. I’d recommend a purchase.