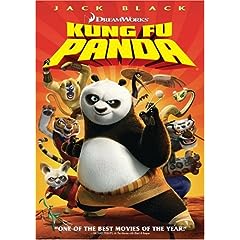 What’s a panda to do when his dreams of kung-fu awesomeness awake to the cold reality of noodle-making? Clumsy, overweight Po (Jack Black) dreams of becoming a kung fu master like China’s revered “furious five,” but instead seems destined to follow in the footsteps of his father and grandfather in the restaurant business. When great leader Oogway has a vision that the imprisoned kung fu warrior Tai Lung (Ian McShane) will soon escape, he declares it time to choose China’s dragon warrior–one kung fu master deemed worthy of possessing the dragon’s scroll and its secret to limitless power. Po and all the townspeople rush to the Jade Palace atop the highest mountain to witness the contest between Tigress (Angelina Jolie), Monkey (Jackie Chan), Mantis (Seth Rogan), Crane (David Cross) and Viper (Lucy Liu), but Po is locked outside the palace. After a miracle of sorts, Po lands inside the palace gates, where he is chosen as the dragon warrior and placed under the tutelage of the decidedly non-plussed master Shifu (Dustin Hoffman). An unconventional student to say the least, hilarity reigns as Shifu tries desperately to make Po into some semblance of a kung fu warrior. Can Po possibly fulfill his destiny as dragon warrior, or was Oogway’s final decision a critical mistake? A film rich with hilarious moments, superior animation, and an important message about believing in oneself and the power that comes from within, Kung Fu Panda is great entertainment that will have the whole family laughing and begging for more.

Dreamworks can’t compete with Pixar’s technology, but they make up for it with beautiful graphic design, sheer wit and – of course – those hilariously quivering “Scrat Eyes”. What’s more, the animators somehow manage to make Kung Fu battles between cartoons both exciting and enjoyable – every bit the match of live action fights (which nowadays are nothing more than CGI with faces pasted on).

However, the most remarkable thing about this film is how faithful it is to Chinese culture – family dynamics, Buddhist philosophy, values, and even martial arts – this film simply HAS to have been written by Chinese. There is never a moment where it strains to “score points” with political correctness. Its characters are never tediously noble “anti-stereotypes”, but are instead lovingly depicted with all their flaws intact while uniquely Chinese messages are delicately hidden within a plot crammed with excitement and laughter. Here you experience how parental love turns into suffocating pressure, here you see teenage rebellion as a monstrosity rather than a virtue, here you see the quirky characters of a city (complete with that wobbly “bound foot” walk), here you hear the wisdom of Zen detachment, and here you experience the sacred relationship between student and teacher.

The DVD is packaged in with a bonus disc sporting the new short “The Furious Five”. The A/V Quality is sharp on both features, but the special features are more substantial on”Kung Fu Panda”. Covering the groundwork from the many starts of the project to the final aesthetic choices, we get a look at well-developed feature. That’s why I recommend the disc for a Blind Buy.