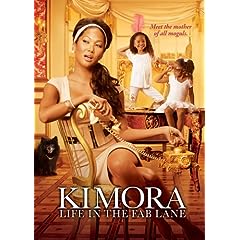 In this stylish reality series, Kimora Lee Simmons — model and ex-wife of entrepreneur Russell Simmons — juggles her life as designer and CEO of the urban couture line Baby Phat, and bringing up daughters Ming Lee and Aoki Lee. The first season finds Kimora planning a Russian-themed photo shoot, hosting a fashion show on her yacht after the Cannes Film Festival and helping her girls design their own Baby Phat togs.

Meet the mother of all moguls! Get an inside look at the glamorous life of fashion model, business mogul, Hollywood diva and devoted mom – Kimora Lee Simmons – with the DVD release of Kimora: Life In The Fab Lane: Season One. The hit television reality series follows Kimora, president of Baby Phat and the creative director of the urban couture line Phat Fashions, and former wife of Hip-Hop mogul Russell Simmons, as she takes the runway by storm. Relive shocking moments with and the team of publicists, managers, stylists, fashion designers and family members as they weather the ups and downs of Kimora’s life in the fast lane.

Kimora is a strong, independent, intelligent woman who successfully balances life as a CEO and doting mother. She’s business-savvy and has a strong work ethic, but she also embraces diva-like behavior and materialistic values. She’s concerned about her weight but has a mostly healthy attitude about her body.

The DVD is an amazing release that shows off a strong Asian woman on television. I’d like to say I give a damn about that, but I’d be lying. The show is boring and belongs on the Style Network. Most of the AV Nation would do well to avoid it. Don’t even make the rental.