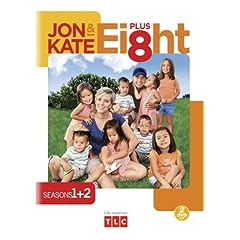 In this TLC reality series, life is anything but boring for Jon and Kate Gosselin: Six-year-old twins and 2-year-old sextuplets make each day an extraordinary adventure filled with all the love — and chaos — that eight young children bring. Witness their joys and challenges as the Gosselins celebrate Jon’s 30th birthday, venture on a family trip to Chocolate World, celebrate Independence Day and more in this Season 1 and 2 series collection.

I have to admit that Kate’s personality is quite hard to take. I can’t help but wonder if she was as controlling, demeaning, belittling towards Jon before the children or if her brand of abuse is something that developed since having 8 kids. I have to applaud her for her hard work and dedication to her children, but someone.. brother Kevin, Aunt Jodi, friends Beth and Bob, or Nana Janet needs to tell Kate to lighten up! She and Jon has to get these children through their teenage years. There is only so much abuse a person can tolerate and Jon may decide to walk 8 kids or not. All in all this is a lovely show about a couple trying to raise 8 young ones. It is one of my favorite programs.

I don’t like reality shows. That’s not a hardline rule, but I’m deeply pressed to think of a single ‘reality show’ that I’ll watch more than an episode or ten minutes of. I sat through four hours of this show, straight out the door, and look forward to new episodes. Why? Because of this show’s sweetness. Moreover, of how it isn’t glammed up or white-washed or scripted. It’s, basically, a bunch of home videos of eight wonderful children and the two parents that are doing their best to make it work.

The DVD is an interesting package. The special features are light, but they show off how the creative team approached the material. I enjoy seeing reality television step up to the plate and deliver something new. I just wish there wasn’t a drinking game for a show about a young family. Oh well, at least they aren’t annoying.