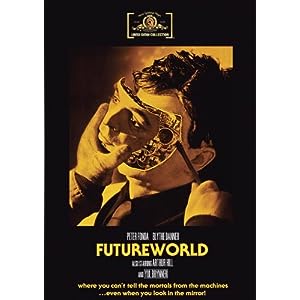 An amusement park of the future caters to any adult fantasy. Lifelike androids carry out your every whim. A fun place, right? Not so, as a reporter and his Girl Friday find out while on a press junket to the newly opened Futureworld.

Years after the failure of Westworld, the same company have regrouped and are planning to open the same theme park again but improved and totally safe. Chuck Browning, the journalist who originally broke the Westworld story, is approached by a mysterious man who has information on this new park  but he is killed before he can tell his story. Looking for dirt under the surface, Browning and colleague Ballard join the elite group selected for the opening few days at the park and begin to investigate a world where nothing is what it seems…nothing.

Because of the film’s intimate connection with Westworld, it’s helpful to make a number of comparisons between the two that help explain how Futureworld holds its own to its infamous brother. Both films are largely satirical (in a more formal, less humor-oriented sense of that term), a caricature of many different facets of society, from amusement/recreation to folly, and in the case of Futureworld, more ominous machinations. Delos is a satire of Disney World and similar theme parks, where we can spend leisure time playing roles, fantasizing that we’re someone else, in some other time.

Whereas Westworld presented its satire of Disney-like escapism on a more surface level, Futureworld is concerned with the reality under the public façade. Westworld presented a few moments of the behind the scenes reality–technicians attending to computers, maintaining robots, fretting about anomalies–but the bulk of Futureworld consists of Browning and Ballard on a figurative journey to the bowels of Hades, where they’ll eventually attempt to “unmask” the devil and destroy his perpetration of hedonistic illusion.

The DVD comes with a trailer and not much else. The A/V Quality is really crisp, which leaves me wondering where MGM is finding the prints. They claim to not have remastered anything, but I can’t get over how crisp these transfers are when you compare to WB’s mixed bag of Archival offerings. Still, Universal seems to be the only studio that is actively trying to clean up their prints. Oh well, this is still a must-buy.