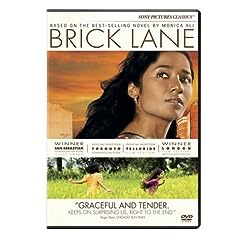 A young Bangladeshi woman, Nazneem, arrives in 1980s London, leaving behind her beloved sister and home, for an arranged marriage and a new life. Trapped within the four walls of her flat, and in a loveless marriage with the middle aged Chanu, she fears her soul is quietly dying. Her sister Hasina, meanwhile, continues to live a carefree life back in Bangladesh, stumbling from one adventure to the next. Nazneen struggles to accept her lifestyle, and keeps her head down in spite of life’s blows, but she soon discovers that life cannot be avoided – and is forced to confront it the day that the hotheaded young Karim comes knocking at her door.

The story centers around a Bangladeshi woman named Nazneen. Nazneen and her sister are very close but due to a tragedy of her mother committing suicide, life has changed in her family and Nazneen, at a young age, is quickly arranged to get married with a man 25 years older than her.

Fast forward twenty years later in London and Nazneen now with two daughters and her husband (Satish Kaushik) live in an apartment in Brick Lane and her husband who is unemployed is always gone during the day and tries to find ways to make money for the family. Nazneen appears to live her life with no soul. Her husband doesn’t treat her with love or an equal, just a wife who does what he says and raises the family. But for Nazneen, the only thing that really keeps her going in life is her two daughters and the letters that she had received from her sister a long time ago.

Her sister appears to have a good life and didn’t get in an arranged marriage and did her own thing. And for Nazneen, each time she writes to her, there is not much to write. She stays home, takes care of the kids and rarely ventures out on her own but only during the day. She has lived a sheltered life and a woman that has no zest in her life, her soul is quietly dying.

But things change for her when she meets her new neighbor who has a sewing machine. Nazneen figures she can raise some money for the family but when a young man named Karim comes to her apartment to have blue jeans mended, the two start to develop an attraction that leads to Nazneen having an affair, which literally changes both of them.

Nazneen seems to be happy, her soul renewed but how long can she keep her secret from her husband and when 9/11 changes the world, it also changes life in London, especially for the Muslims. Nazneen’s life and the people close to her will never be the same again.

The DVD does a great job of showing off the main film. Outside of that, you’ve got a decent array of special features for an indie flick. The commentary was appreciated, as I’m not that well-versed in Pan-Asian relations in Britain. But, that’s why we watch these movies. So, that we can expand our minds.