Enjoy the delightfully thrilling tale of a mysterious house where things, including the inhabitants, are not what they seem to be. The House With a Clock in its Walls arrives on Digital and via the digital movie app MOVIES ANYWHERE on Today, November 27, 2018, as well as on 4K Ultra HD, Blu-rayTM, DVD and On Demand on December 18, 2018. Based on the classic children’s book and praised as “creaky, freaky haunted-mansion fun” (LA Times), The House With a Clock in its Walls features over 60 minutes of bonus content including an alternate beginning and ending, stunning featurettes, deleted scenes, a hilarious gag reel, and feature commentary. Enchanting from start to finish, it’s the perfect adventure for families during the holidays.

Full of wonder and adventure, The House With a Clock in its Walls mesmerizes audiences of all ages and keeps the magic alive when stars Jack Black (Jumanji: Welcome to the Jungle, Kung Fu Panda), Cate Blanchett (Ocean’s 8, Thor: Ragnarok) and Owen Vaccaro (Daddy’s Home, Mother’s Day) arrive as Uncle Jonathan, Mrs. Zimmerman and Lewis Barnavelt. In the most unexpected places, fantastical events, miraculous twists and suspense filled moments ensue in this “zany kids adventure” (The Hollywood Reporter) that soon captivates adults as well. In the tradition of Amblin classics, master frightener and director Eli Roth’s The House With a Clock in its Walls is a family-friendly fantasy film that “stands alongside the ‘just for kids’ classics of the 1980’s and 1990’s” (Forbes).

In The House With a Clock in its Walls directed by Eli Roth (The Green Inferno, Cabin Fever), Lewis Barnavelt (Vaccaro) goes to live with his Uncle Jonathan (Black) in a creaky and creepy mansion with an eerie tick-tocking heart. But when Lewis soon finds out he’s in the presence of magic practiced by his uncle and neighbor Mrs. Zimmerman (Blanchett), his new town’s dreary aura boosts to life in an exciting and dangerous way. Based on the beloved children’s classic book written by John Bellairs and illustrated by Edward Gorey, The House With a Clock in its Walls is written by Eric Kripke (creator of TV’s “Supernatural”) and co-stars Kyle MacLachlan (“Twin Peaks,” Inside Out), Colleen Camp (Clue), Renée Elise Goldsberry (“One Life to Live”), and Sunny Suljic (Mid90s, The Killing of a Sacred Deer). It is produced by Mythology Entertainment’s Brad Fischer (Shutter Island) and James Vanderbilt (Zodiac), as well as Kripke.

The film will be available on 4K Ultra HD in a combo pack which includes 4K Ultra HD Blu-rayTM, Blu-rayTM and Digital. The 4K Ultra HD disc will include the same bonus features as the Blu-rayTM version, all in stunning 4K resolution.

IFC Midnight invites you to screen PLEDGE, directed by Daniel Robbins. Three nerdy college freshmen, Ethan, David, and Justin, are having a tough time adjusting to college life. Rejected and ridiculed by just about every fraternity on campus, they are prepared to give up all hope. That is, until a girl invites them off campus to a party at a secluded mansion. They are not only invited in, but also treated like princes by the resident brothers. The party is everything they dreamed college would be—beautiful women, drinking, and most importantly, a cool group of guys willing to accept them as one of their own. When the friends are presented with an opportunity to pledge the elite social club, they accept without hesitation. However, as the gruesome, dehumanizing hazing progresses, a more sinister picture of the club emerges. PLEDGE had its World Premiere at top genre festival FANTASIA in Montreal, and is fresh off its U.S. premiere at SCREAMFEST in Los Angeles.
CAST: Zachery Byrd, Aaron Dalla Villa, Zachary Weiner, Phillip Andre Botello, Cameron Cowperthwaite, Jesse Pimentel, Joe Gallagher, and Erica Boozer
DIRECTOR: Daniel Robbins
WRITTEN BY: Zachary Weiner
PRODUCED BY: Mark Rapaport
EXECUTIVE PRODUCED BY: JD Lifshitz and Raphael Margules

An ordinary woman must summon extraordinary courage to survive a nightmare odyssey in this harrowing survival thriller. Sawyer (Hermione Corfield) is an ambitious, overachieving college senior with a seemingly bright future. While on her way to a job interview, a wrong turn leaves her stranded deep in the frozen Kentucky woods. Suddenly, the young woman with everything to live for finds herself facing her own mortality as she’s punished by the elements and pursued by a band of ruthless outlaws. With nowhere left to run, she is forced into an uneasy alliance with Lowell (Jay Paulson), an enigmatic loner with shadowy intentions. Though she’s not sure she can trust him, Sawyer must take a chance if she hopes to escape RUST CREEK alive.

RED-BAND Trailer for LIFECHANGER released! | Out 1/1/19

The highly anticipated LIFECHANGER will be released in the US January 1, 2019, by Uncork’d Entertainment and in Canada by Raven Banner Entertainment.Written and directed by Justin McConnell, LIFECHANGER tells of a murderous shape-shifter that sets out on a blood-soaked mission to make things right with the woman he loves.Drew has an identity problem. Every few days, has to shape-shift, or face a painful death. He has to find someone and make a copy. He takes everything: their looks, memories, hopes, and dreams. Their entire life. He becomes them, and they die horribly. Enter Julia, the object of Drew’s affection. How can he make things right when he’s never the same person for very long? How do you gain back trust when who you are keeps changing? Part psychological thriller, part body horror, Lifechanger follows one shape-shifters’ twisted quest to repair the damage he’s caused, while leaving a trail of bodies in his wake.LIFECHANGER is written and directed by Justin McConnell, and produced by Avi  Federgreen and McConnell. Executive producers include James Fler, Andrew Thomas Hunt, Keith Leopard, Michael Paszt, Pasha Patriki, and Marvin Waxman. Produced by 9 Light Entertainment in association with Federgreen Entertainment and Unstable Ground.Lora Burke, Jack Foley, Elitsa Bako, Sam James White, Steve Kasan, Rachel Vanduzer, Peter Higginson, Adam Buller, Brian Quintero, Mark Rainmaker, Ry Barrett, Michelle D’Allesseandro Hatt, Uche Ama, and Daniel Faraldo star.

The much talked web series, “Only Children,” will be airing the final episode of it’s first season on Monday, December 17. I have included the trailer for the final episode below, would you be intersted in featuring this trailer with your readers?
The show stars Wayne Wilcox (TV’s “Gilmore Girls”) and was created by the co-executive producer of MTV’s longest running series, “The Challenge.” The first season of Only Children concludes with everyone’s lives at a crossroads: Ray’s back and forth love life with Cooper and Simone will take a surprising turn. Daysha’s marriage to Stephen is put to the test when he finally asks her about having kids. Molly decides that it is time to finally stop being a doormat, but it will come at a cost. Mohammed’s double life catches up with him and causes him to spiral. And we will finally learn about the defining moments from their teenage years that brought them close together.
Tags: Justin McConnell, Lifechanger, movie trailers, Pledge, Rust Creek, THE HOUSE WITH A CLOCK IN ITS WALLS 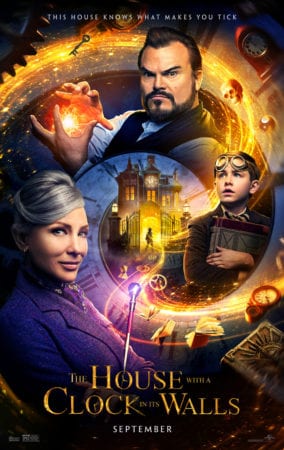