Summary
The USS Reluctant carries cargo along World War II's forgotten Pacific seaways. Beyond the horizon, the real war passes its stir-crazy crew by. Mister Roberts, directed by John Ford and Mervyn LeRoy, is the classic story of men fighting to survive - not war's dangers, but its indignities. Henry Fonda's reprise of his Tony®-winning Broadway role returned him to movies after seven years away. Jack Lemmon won his first Academy Award®* as hapless, lecherous Ensign Pulver. James Cagney's petty, scrappy Captain makes a fierce adversary. In his final film, William Powell makes world-weary Doc a sage for the ages. Mister Roberts has moments of unforgettable humor. But sadness tempers the comedy. No shot is fired. No blood is spilled. Yet Mister Roberts endures as one of our most truthful war sagas.
7.9
Good
Video - 7.4
Audio - 8
Movie - 8.3
Special Features - 7.8

Mister Roberts is a movie that doesn’t make sense when you look at on a list. John Ford and Mervyn LeRoy don’t exactly gel as a directing team. Who is really the lead actor? James Cagney, Henry Fonda and William Powell all could be argued as equal leads. Then, there is Jack Lemmon stealing focus in one of the strongest supporting roles of the 1950s.

Henry Fonda is one of Golden Age Hollywood’s greatest leading men. Plus, he was quite possibly John Ford’s greatest leading actor. Sorry to those that prefer John Wayne, but Fonda had a way with Ford’s style that was unmatched. It was almost like how Samuel L. Jackson reads Tarantino’s dialogue.

Jack Lemmon shines as Ensign Pulver. His character was the complete antithesis to how men were shown in World War II movies. Pulver didn’t want to fight and he went out of his way to hide on the ship. When he finally comes face-to-face with James Cagney, Cagney doesn’t recognize him as a member of the crew. People might laugh, but it’s played super serious.

All the while, all of the older actors keep ignoring what Henry Fonda is doing as Mister Roberts. He’s putting everyone’s life in danger by constantly harassing his superiors to get sent into action. From denying shore leave to screwing with ship morale, Roberts is constantly pitching a fit to get his way.

Then, Mister Roberts gets killed by a kamikaze attack.

What’s so strange from a modern perspective is how Mister Roberts getting killed is shown as being a teaching moment to the rest of the crew. Not in highlighting his bad behavior, but by inspiring the others to be more like Roberts. War movies are insane in their own way, but it’s to be expected for the time.

John Ford knew how to shoot out around ships and to get the actions shots as needed, but LeRoy made sense for the dialogue heavy moments. It was an interesting choice and one that paid off with a Best Picture Oscar nomination. But, was it good?

The short answer is not really when you think about it, but it was good enough for a 1950s war movie. A lot of the material can be chalked up to the rise of Broadway dramatics and that talent moving to the big screen. Mister Roberts started as a play by Joshua Logan and Thomas Heggen. The more you watch the film, the more it holds up.

Does a war movie hold up when you have to focus on the dialogue? How many meaningful messages can you have about how war is hell? I’d take something about violence over a crew being made to feel shame over their Principal Skinner style leader being sent to his death. There is a lot about machismo and the male death wish that doesn’t get acknowledged here.

But, that’s a story for another time. As 2021 rages on, we’re going to go in-depth spotlighting older films for extended periods. I have a raging brain itch to start tearing into the big manly movies of the 1940s-1960s. However, I wonder how much of a demand there is out there for it. If you want to see AndersonVision tackle something like that, hit me up.

Warner Archive brings Mister Roberts to Blu-ray with a scene-specific commentary by Jack Lemmon. You also get a trailer, but that’s not the real pickle here. That 1080p transfer while making Mister Roberts look better than I’ve ever seen it…the film still looks rough. The DTS-HD track is clean enough for a 5.1 surround mix. Honestly, I wonder if the movie needs a full restoration at this point.

Fans can purchase Mister Roberts at www.wbshop.com/warnerarchive or online retailers where DVDs and Blu-rays® are sold Mister Roberts is a movie that doesn't make sense when you look at on a list. John Ford and Mervyn LeRoy don't exactly gel as a directing team. Who is really the lead actor? James Cagney, Henry Fonda and William Powell all could be argued ...
0
Average User Rating
0 votes
Have Your Say!
Your Rating: 0
Submit
Write A Review
Genre:Comedy
Rating:Not Rated
Director:John Ford, Mervyn LeRoy
Studio:Warner Brothers 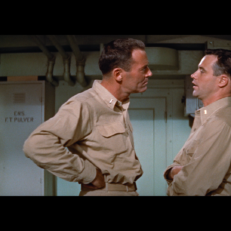 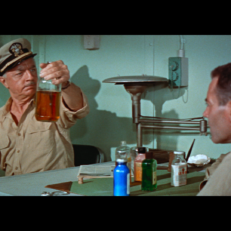 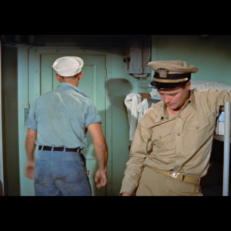 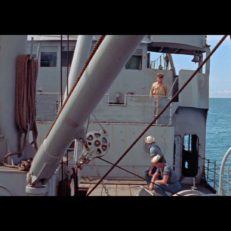 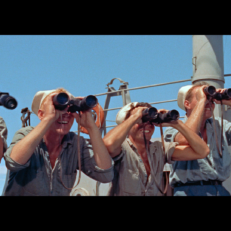 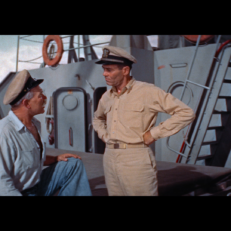 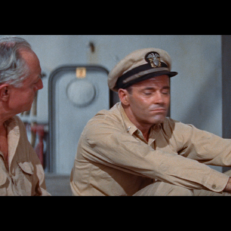 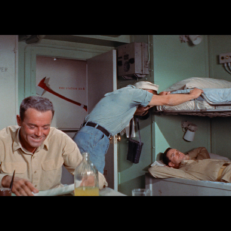