Summary
"Truth is the Only Client: the Official Investigation of the Murder of John F. Kennedy", premiering November 17, 2020. Pre-order now on Itunes/Apple TV now: https://apple.co/31mZKBB.
8
Great

Truth is The Only Client is a documentary about one of my favorite subjects in the world. Who exactly murdered John F. Kennedy? The 1963 Presidential Assassination is something I obsess over as it might be one of the truest points of 20th Century Americana. Don’t understand what I mean? Well, hang out…I’ve got a rant brewing.

So much of the American myth is deeply routed in what happened in Dallas on that fateful November day. The leader of Camelot struck down by a single gunman in front of a Holiday crowd. It was one of the first live events covered by the American News Media. Hell, Walter Cronkite announcing Kennedy’s death was almost as big as the assassination.

Divorce yourself from the visuals presented in Truth is The Only Client and you’ll discover a super powerful truth. 57 years later, the average American still knows nothing about what happened in Dallas. That’s because JFK’s death has been a media circus that keeps feeding upon itself.

The Murder of John F. Kennedy is exhausting to the average person. There are those that don’t trust the government, those that wisely examine how Dulles and Johnson had personal stakes in Kennedy’s death. Then, there is the whole Bay of Pigs debacle and all the stuff that works like Viagra for Oliver Stone.

I’ve lost count of the sheer volume of Boomers I watched disappear down those rabbit holes never to recover. So, what does that mean for us watching Truth is The Only Client in 2020? It means that we have to get used to new generations doing their best to Occam’s Razor their way to a conclusion regarding one of the darkest chapters of American history.

What annoys about the documentary is so much of Truth is The Only Client feels like an apology for The Warren Commission. I appreciate the scholarly approach to the material and it will win over casual viewers. But, that’s if they haven’t done any research about the subject matter. There is a clean-cut narrative to have about the incident, if you choose to ignore literally everything else surrounding the case.

By tracking down the junior researchers and surviving members of The Warren Commission, you’re counting on 80 and 90 year olds to tell the truth and remember secrets accurately. While Truth is The Only Client talks about how the Warren Commission revealed that the FBI and other agencies destroyed several documents about the assassination, they left out one crucial detail.

The Warren Commission botched parts of the ballistics tests.

Before I move on, I just want to make sure you have way more information to research on the matter.

So, genius…what do you think happened?

The non-fiction book Mortal Error and later examinations made the case for the Secret Service providing the fatal shot. That’s how a conspiracy becomes a cover-up. Due to the sheer nature of large government bodies to operate in unison, it’s easier to accept that they can cover their asses quicker than staging a coup.

Back in 1963, America hadn’t experience the metaphysical Catch-22 that was Vietnam. It was harder for the nation’s psyche to handle that a conceptual coup gave way to a lone psycho causing an incident where a security detail failed to provide proper coverage. That’s why I don’t totally dig what I saw in Truth is The Only Client.

It doesn’t appreciate the insanity that happens when so many people get together to make sense of the unfathomable. The human brain wasn’t designed to accept what happens when reality blows a wet fart on your being. So, what does it all mean?

The Democratic Response: People Who Disagree with Mortal Error

When Mortal Error came back into prominence in 2013, many outlets including The Philly Inquirer tried to shoot down the Mortal Error theory.

That being said, I feel the Philly news media failed yet again. At this point in the assassination examinations, we’re using computer models and replicated materials to stage a moving murder site. Was the Texas Governor slouching or in a side seat? Who moved during the drive?

So many things to nit pick and no one is any closer to an answer that satisfies.

The rabbit hole goes super deep regarding the JFK assassination. It’s widely assumed from leaks that RFK absconded with his brother’s brain to keep it from being put on display. But, 95% of the people involved in the disappearance are now dead or too far removed from the initial act to provide adequate witness response.

What does that mean, dear children of the Weekly World News? Is it a case of a famous family asking for the nation to not be so damn morbid? Or is it what I feel like it is as do a lot of other people? An effort to hide evidence so that you can make an official story for the nation to accept.

Truth is The Only Client, but Bullshit Still Gets A Lot of Work

JFK’s presidency was plagued with issues related to a young famous man having obtained the highest office in the land. His ties to entertainers with mafia ties, the sheer battles with Dulles and the CIA and the botched Operation Northwoods and Bay of Pigs Invasion were heavy black marks on any Presidency. Even if Kennedy wasn’t onboard with all of these ideas, that is a lot to happen in less than 3 years.

That’s not to overlook the fact that Kennedy was not a well man. Suffering from crippling spinal damage suffered during the sinking of PT-109, it would be decades before the public knew of JFK’s medical issues. Dr. Max Jacobson became JFK’s physician of choice, as most of the Washington Inner Circle knew about the Berlin educated Dr. Feelgood.

Hell, Mad Men created a knock-off version of Dr. Jacobson who showed up to Sterling Cooper Draper Pryce to give everyone B-12 injections. It’s funny to watch the clip above and imagine Jon Hamm as JFK charging around the White House with ideas about the Peace Corps and aiding the Civil Rights movement.

But, given that JFK was taking 7-8 shots of procaine to his spine daily to be able to entertain the Presidential duties is insane to think about now. Especially since Procaine was one of the drugs found in Michael Jackson’s system towards the end of his life.

Give me the big picture, Anderson.

President John F. Kennedy probably shouldn’t have been President. If Nixon would have won and took the White House 8 years earlier, what would have happened? Would Vietnam became worse? Does the Hippie and Civil Rights Movements ever get off the ground? Does it kick off a series of labor, race and youth riots unmatched by what we later came to experience?

Truth is The Only Client doesn’t entertain such thoughts. What it does is the straight-laced A student version of making sense out of a box of scraps. If I give a college kid parameters and tell them to write a five page essay, I have an idea of the answers I will receive. But, if I give a documentarian a grant and working equipment, I’ll get different answers.

While I enjoyed Truth is The Only Client and any films about the JFK Assassination, I understand what I’m watching each time. The further and further you get away from traumatic zeitgeist, it’s harder to ever correctly framed what happened. Don’t believe me? Let’s look at some of the greatest hits of the last few decades.

The Sinking of the Lusitania

The Gulf of Tonkin

The human mind responds to the big and inconceivable by applying similar parameters to what I described awhile ago. Does it mean it’s correct or not correct to produce a meh, an essay or a documentary as a response? Truth is The Only Client is frustrating in that it didn’t try to stick that bit to the audience.

The average Western viewer will never have to deal with death, planned murder and unreasonable carnage on a personal level. However, assassinations of famous people play the same way as suicides of famous people impact others.

When a populace invites a leader or major figure into their life, they share private and public moments by proxy. Tribal mentality is ruining a lot of politics and interpersonal relationships, but it’s all the driving force here. So, when this giant figure in your life is suddenly removed by whatever force, your brain has to make sense of that loss.

Elderly Memphis residents still claims to see Elvis and hologram Tupac isn’t putting his fans at rest. So, it makes sense that certain parts of America would want to put the JFK assassination to rest. All I’m saying is that I don’t buy a man whose back was so warped from wartime injuries could sit perfectly in a motorcade. Especially in an open-top convertible stiff seated 1963 car.

Even before you calculate the velocity and impact of Oswald’s rounds, it means that even with snap back…JFK would have kept perfect posture. The magic bullet theory only holds up for one shot, what about the other bullets? Truth is The Only Client ducked on that one.

Truth is The Only Client: The Official Investigation of The Murder of John F. Kennedy Available On VOD on November 17, 2020 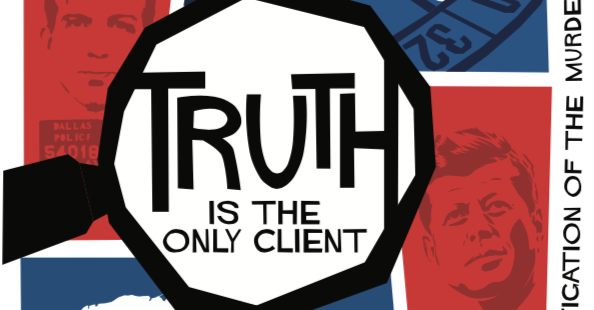 Truth is The Only Client: The Official Investigation of The Murder of John F. Kennedy (2020) [Essential History documentary review]

Truth is The Only Client is a documentary about one of my favorite subjects in the world. Who exactly murdered John F. Kennedy? The 1963 Presidential Assassination is something I obsess over as it might be one of the truest points of 20th ...
0
Average User Rating
0 votes
Have Your Say!
Your Rating: 0
Submit
Write A Review
Genre:Documentary
Rating:Not Rated
Director:Rob Stegman, Todd Kwait
Studio:Bluestar Media