Summary
From Academy Award-nominated Steve James, the 5-part documentary series shows a complex portrait of Chicago, the quintessentially American city, from the history-making 2019 mayor's race to the tumultuous summer of ‘20.
9.3
Amazing

City So Real proved to me that Steve James owns Chicago on film. That might be because I’m a huge Hoop Dreams fanboy, but this is a stunning work. Documentaries will always get covered at AndersonVision, but it’s been awhile since I’ve seen such truth spread across five episodes. But, what makes it work?

Director Steve James examines the impact of 2019 and early 2020 in Chicago. From the election of Mayor Lightfoot to the ravages of COVID, James never looks away. National Geographic has been stepping up their efforts on the documentary front recently. Pretty soon, we’ll be covering their Rebuilding Paradise. But, let’s talk City So Real some more.

Chicago has been featured in documentaries before. However, there has never been such a perfect time capsule of how one city can change in 12 months. The stunning shots of people in the streets getting out the vote to closed storefronts is staggering. When we look back at 2020 from the comforts of a future time, this is it. Life shut down and James caught it on film.

Upon finishing City So Real, I automatically went to Hulu to rewatch the documentary. Fiction is great and all, but when can you capture such reality like this? We’re living in the softest dystopia ever, but feeling the effects of an entire species freaking out at the same time. Reality has never been more dubious, but yet we can all see what’s going on around us.

City So Real indeed. Next year, this better clean up during Awards Cinema. 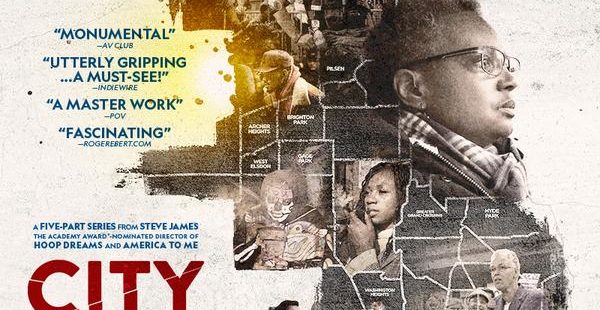 From Academy Award-nominated Steve James, the 5-part documentary series shows a complex portrait of Chicago, the quintessentially American city, from the history-making 2019 mayor's race to the tumultuous summer of ‘20.