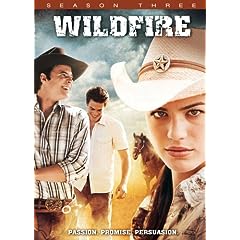 Kris Furillo (Genevieve Cortese) has just finished serving time at a juvenile detention center for grand theft auto and resisting arrest. Upon her release, she is offered a job at the Ritter family ranch after Pablo Betart (Greg Serano), a center volunteer who teaches inmates to ride horses, notices Kris’ unusual talent with the animals, especially the horse Wildfire, with whom she has bonded. In Season 3, Kris hopes to save Raintree Ranch from devastating financial news, but the rivalry between Raintree and Davis Farms intensifies as they fight to save themselves. And a cruel betrayal leads Kris to reconsider her romantic relationship with Junior (Ryan Sypek). Meanwhile, Matt (Micah Alberti) steps in and lends her support, leaving Kris once again torn. With two great guys to turn to, she is forced to make a decision. Whom will she choose? Continue your collection with all 13 episodes of Season 3, complete with exclusive bonus material including audio commentaries with cast and crew.

Kristine “Kris” Furillo (Genevieve Cortese) was considered a trouble youth. She was convicted of auto theft and served her time in a juvenile facility. She takes a job at the Raintree farm working as a groom fro their horses. One horse in particular, Wildfire, becomes a special project for Kris. She saves the horse from being put down and trains it to become a champion racehorse. She also finds herself in a sporadic relationship with Junior Davis (Ryan Sypek) and Matt Ritter (Micah Alberti). Junior is the son Ken Senior (James Read), the most powerful man in town and owner of a rival farm. Matt is the son of Jean (Nana Visitor), the owner of Raintree. Of course since this is basically a soap opera we need a nasty female rival for Kris. She appears in the person of Dani Davis (Nicole Tubiola), the daughter of Ken Senior and half sister to Junior. She hates Kris not only for her choices in men but also for her superior riding abilities. One rival is not enough so the first season also introduced Tina Sharp (Amy Jo Johnson) who is not only after Kris place on top of Wildfire but her men as well.

Genevieve Cortese started her role as the blue collar girl in the midst of rich folk. She has grown with her character making her identifiable to the legion of fans. She has a natural way of emotionally connecting with her audience. Cortese is someone to watch in the future. Nicole Tubiola seems to have a lot of fun with her role as the deliciously evil Dani. It takes a lot of control to play a soap opera villainess successful and she does it. She takes her character to the very edge but never goes too far over the top. If anyone can demonstrate the dangers of teen drinking it is this character.

The DVD sports amazing A/V Quality for a basic cable show. You get audio commentaries on the episodes from the cast and crew. Plus, you get decent audio. There’s not a whole lot on the set, but what there is counts. That’s why I’d recommend it for a rental.