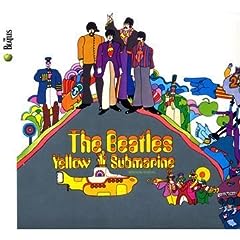 The most dashed-off of the Beatles’ records, Yellow Submarine doesn’t have much to it: the goofy title track and “All You Need Is Love” are reprised from earlier discs, George Martin’s trifle of a score to the animated Submarine feature takes up the second half, and that leaves just four relatively insubstantial new tracks. The Beatles’ throwaways are anyone else’s classics, though: “Hey Bulldog,” the last song Lennon and McCartney wrote in full collaboration, has the instinctive urgency of their best work, Paul’s singalong “All Together Now” is awfully cute, and more than one band has dedicated its career to trying to replicate what George’s guitars are doing on his dazed, pulsing “It’s All Too Much.”

Traditional soundtrack albums usually feature the background music of the movie with the occassional song(s), the opening and/or closing theme song. The albums are kind of souvenir of the movie experience. This is not a regular issue Beatle album and it makes no pretense to be.

The actual soundtrack albums by the Beatles, in their original UK issue, were always one side soundtrack songs then other Beatle material on the second side. The original USA issues of A Hard Day’s Night and HELP were songs mixed with instrumentals. If memory serves the instrumentals on A Hard Day’s Night were by George Martin and HELP by Ken Thorne, who later did the incidental music for the Monkees’ movie HEAD.

Side one on the original recording had a variety of Beatles tunes that included stand outs like Lennon’s “Hey, Bulldog”, and George Harrison’s “It’s all too much”, as well as some others that had been released on other recordings such as “Yellow Submarine”, and “All You Need is Love”. Other songs included are “Only a Northern Song”, “All Together Now”, and “It’s All Too Much”.

Side two was the orchestral side of the soundtrack by George Martin, with songs like “Pepperland”, to “Sea of Holes”, to “Yellow Submarine in Pepperland”. I didn’t find these musical pieces by Martin overly striking, but they do offer one a chance to hear Martin’s influence on the Beatles. This shouldn’t be the first CD one buys if one wants to hear the Beatles. Instead, it’s more of a supplimentary CD that fills in some of the musical gaps in the Beatles’ history.

This recording was released in 1969. The most recent recording was the film score on side two which was re-recorded by George Martin with 41 musicians in Studio One of Abbey Road in October 1968. Most of the other songs were recorded long before this album was released, including “Yellow Submarine”, which was recorded in 1966, and appeared on the “Revolver” album. This CD was remastered from the original stereo analogue master tapes, except for “Only a Northern song”, which was remastered from the original analogue mono master tapes.