Contents hide
1 A WRINKLE IN TIME REVIEWED
1.1 “There are forces working in the world as never before in the history of mankind for standardization, for the regimentation of us all, or what I like to call making muffins of us, muffins all like every other muffin in the muffin tin. This is the limited universe, the drying dissipating universe that we can help our children to avoid by providing them with ‘explosive material capable of stirring up fresh life endlessly’.”
2 FILM STATS
3 RELEASE DATE: 3/8/18

A WRINKLE IN TIME REVIEWED

“A Wrinkle in Time” has set the Internet on fire. Meanwhile, the real world is still embracing the majesty of Wakanda. What a time to be alive! More people are taking an interest in cultural representations in creative media. Better art is being made and more voices are getting to share in fictional worlds. Oh wait! What’s that in the corner? It’s that same phantom menace that lurks about all of these cultural events. It’s victim mentality!

For every Black Panther and Wonder Woman, there’s always going to be that creative work that demands attention. These are creative misfires forged out of best intentions and executed with lead hands. But, what about the fans? Well, where were they for the 2003 adaptation? Outside of Lisa Simpson stylized young ladies, this book has never set the charts on fire. It was a critical hit upon publication in 1962, but it wasn’t a mainstream classic.

The work of Albert Einstein inspired the novel, as Madeleine L’Engle took in an interest in quantum physics and tesseracts. L’Engle based the heroic Meg Murry upon herself. She felt homely and unnoticeable, but could succeed based on intellectual strength. While there are huge Sci-Fi elements, this is a novel about inspiration. When L’Engle won the Newberry Medal in 1963, she made her intentions very clear. She crafted this tale to inspire mankind to be different. Her quote upon receiving the Award is below:

“There are forces working in the world as never before in the history of mankind for standardization, for the regimentation of us all, or what I like to call making muffins of us, muffins all like every other muffin in the muffin tin. This is the limited universe, the drying dissipating universe that we can help our children to avoid by providing them with ‘explosive material capable of stirring up fresh life endlessly’.”

Cut to the present day and the book was lost for a bit. In fact, one of my middle schools had banned the book from the library for being Anti-Christian. What’s funny is that they left the rest of the Time Quintet for kids to read. As mentioned before, this is Disney’s second stab at the material. Their 2003 TV adaptation was a straightforward approach, but on a smaller scale and virtually a carbon copy of the Cliff Notes. 15 years later, Disney has given Selma director Ava DuVernay the budget to finally bring L’Engle’s vision to the big screen. So, what happened?

While I don’t enjoy DuVernay’s style, she hits many of the same notes as the previous adaptation. The FX heavy character design is perfection and she plays with the Tesseract mechanics in a rather fun way. Then, there’s the delightful Storm Reid as Meg. I can’t wait to see what she does next, as she kills it here. But, that’s where the good times end.

If you’ve read the book and then seen the movie, the absence of Aunt Beast will strike you odd. Aunt Beast helps Meg find the courage to enter The It’s lair. Given the current feminist push in modern cinema, someone made the creative choice to axe Aunt Beast. After all, you can’t have a Mary Sue if she’s getting help. But, what does an action like that do to a work of fiction targeting young people?

Well, it’s not that hard to imagine. By making a young girl into a fully-realized character, you admonish the learning process. Everything encountered in the film becomes a series of encounters rather than a learning process in the Hero’s Journey. That undercurrent derailed a lot of the groundbreaking potential for the film. Instead of Meg escaping the Earth to master her destiny on far-off worlds, it becomes Meg meeting three weird ladies. Then, it’s Meg and the boys learning about a weird robot and alien landscapes. Nothing informs her becoming a better character.

A shared connection makes it easier for audience members to connect to a character. In fact, Disney is counting on young girls in weekend audiences to connect to a heroine that looks like them and has STEM interests. This isn’t a film in search of an audience, they know who they’re targeting. Unfortunately, girls between the ages of 9-14 haven’t helped to shore up a film’s box office since Titanic. So, what is a film to do?

First, divorce itself from its toxic supporters. This is where we return to the Victim Mentality point. The current sociopolitical landscape has transformed into this verbally toxic arena where division is the goal. “A Wrinkle in Time” surprisingly doesn’t lean into this claptrap ala “The Last Jedi” or “Ghostbusters (2016)”. After all, you don’t have to do that when there’s an enraged legion of social media talking heads willing to jump on that grenade. This is why I’m glad I get to see things early.

Due to the connectivity of the Internet age, it’s super hard not to have others taint your thoughts and opinions. You can be the most strict hermit, but if you can Google anything…you’re going to be influenced. We live in the Age of the Amateur and it’s a double-edged sword. The democratic concept of everyone having a voice is amazing in practice, but it’s an ocean of cacophonic noise. Some are going to support the movie because Black Panther has them riding high on African-American led cinema. Others are going to decry it for not being a faithful adaptation of the novel.

It’s a sea of unrelenting noise attempt to distract and remarket the film away from its faults. The script is streamlined to the point that it treats the narrative journey as an inevitability for Meg. The dynamic between the Three Mrs. is out of whack. Reese Witherspoon overpowers the other two at times, then Oprah doesn’t bring a sense of urgency to her scenes. Poor Mindy Kaling almost plays like most of her dialogue will exist in a deleted scene somewhere.

Ultimately, I’m just one voice in a never-ending stream of people that will screech about the film between now and the close of the weekend. What could’ve been an amazing film is derailed by its inability to balance the source novel and a coherent script. DuVernay needed an FX heavy film between her previous work and this feature to work out the Genre Fantasy trappings. Finally, this film needed to do right by the kind of heroine that Meg Murry could’ve been for young girls. Storm Reid worked her ass off to make it work, but sometimes…it just doesn’t come together.

That doesn’t mean that Disney should stop trying with these films. It just means that they should learn from what doesn’t work. Meg and the Murry family deserve a life in the cinema. If you champion DuVernay or Minority-led cinema, you’re not doing this movie a favor by forcing it upon people. The cinema has existed before you and will exist long after you have died off. Address the faults of the film, understand the areas of improvement and hope that Disney will roll the dice on the rest of the Time Quintet. Just because the first swing at bat wasn’t ideal, it doesn’t mean that the next time won’t be a home run.

Little girls around the world need a Meg, a Rey and a litany of heroines to come. Just make stories & productions worthy of the effort. 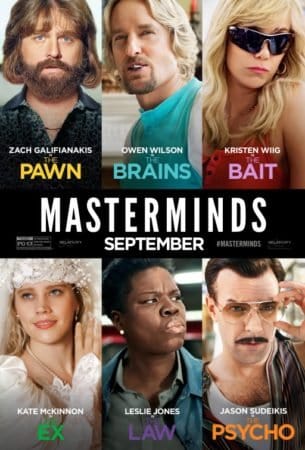 WATCH THE NEW TRAILER FOR THE HEROIC ACTION-THRILLER “THE FINEST HOURS”
July 19, 2015