A group of teenagers head out to the lake for a relaxing camping trip in the mountains. They ignore the warnings of the local truck stop owner and head to their destination. Things go terribly wrong when they run into an extraterrestrial who throws deadly discs that suck the blood of their victims. The group heads back to the truck stop for help from the eclectic group of residents: a crazy war veteran (Martin Landau, Ed Wood) and a determined hunter (Jack Palance, Batman).

“Without Warning” answers the question of what would “Predator” be like if Jack Palance was the star of the film? Basically, it would be about an alien hunting teenagers with killer starfish and Palance  gearing up the shoot the hell out of it. Martin Landau is also in this film, but he’s deranged for the majority of it. Plus, is it just me or does anyone else have a hard time buying Martin Landau as a Vietnam Veteran? I could buy Fred Ward, Peter Coyote or Sonny Landham. However, it’s just not happening with the guy from “Space: 1999”.

I love the cast in the sense that they capture that moment in time where B cinema was an American art form. So much of the Italian horror world, American Sci-Fi and Westerns had come together to create something more than the sum of its parts. While many of its members went onto bigger and better things, this film was Sci-Fi teen slasher exploitation at a time before it was being usurped by the major studios. Don’t watch it for a nostalgia cast spotting, watch it to thrill to a time where alien starfish were legit mechanisms of death. I envy the people that got to see “Without Warning” in its first run.

The Blu-Ray comes with a DVD copy, commentary, interviews and a trailer as the special features. The A/V Quality is sharp for a film of its age. The 1080p transfer is a little too crisp at times, but it makes that Dean Cundey cinematography pop. The DTS-HD mono track is period appropriate without being over expansive. In the end, I’d recommend a purchase to the curious. 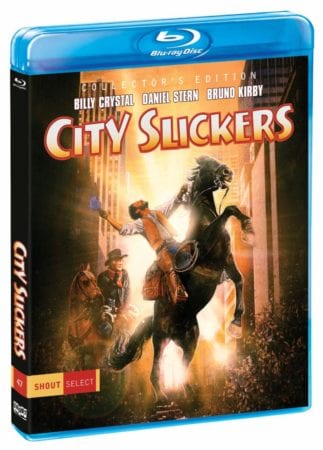