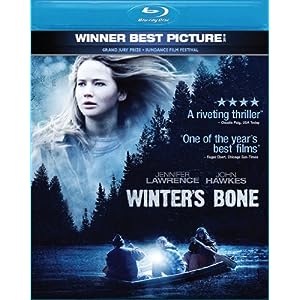 17-year-old Ree Dolly (Jennifer Lawrence) sets out to track down her father, who put their house up for his bail bond and then disappeared. If she fails, Ree and her family will be turned out into the Ozark woods. Challenging her outlaw kins code of silence and risking her life, Ree hacks through the lies, evasions and threats offered up by her relatives and begins to piece together the truth. Based on the novel by Daniel Woodrell, Winter’s Bone is the winner of the 2010 Sundance Film Festivals Grand Jury Prize.

Missouri Ozark hillbillies trying to scratch out a living on poor soil and even worse personal resources, so it was no wonder meth production was embraced as a life-changing profit center that had the illegal potential to change their lives for the better. Their poor lives before meth had a certain dignity in the hard struggle for survival in an uncaring world that had passed them by or never allowed them to catch up, either or both, but cheap and dangerous drug production leading to fast but risky money took these unfortunates down a road that surely few would have chosen if they had a chance beforehand to see any of the personal and social harm it created in a society already at great risk of decent survival. What great harm it did was shown and acted brilliantly, as it pushed these already at-risk people lower down the chain of life than before and surely even lower than the wild animals they had to kill for food.

A young girl of 17, seeming older than her years, beaten up and beaten down, wary of those around her but needing their help, and with 2 young siblings and a helpless mother to care for, she learned that her drug-making, drugged-out father disappeared and missed a court date for a drug arrest, and the most important task of her life then became finding her father before they lost their meager home to bondsmen, as that sorry home place was all they had in the world but it was home and she intended with all her heart and soul to do whatever it took to keep it and her family together. The acting throughout was appropriately serious to deadly, with hardly even a smile to be seen, and left us thankful as seldom before for whatever our own lives give us compared to those in the story.

Using grey and oppressive colour tones, the entire film is shot in a bleak wooded landscape, where the grizzle-bearded men all look like they’ve just left the set of ‘Southern Comfort’, and the straggle-haired, world-weary lined faces of the women add to the unspoken sense of the harsh reality of life here. I doubt they see many tourists in this neck of the woods, and at the same time, the film steers well clear of the ‘and if they did, they’d probably eat them’ stereotype. I liked the sparse and effective use of bluegrass-folky-type music, which cut through, and gave some relief to, an otherwise fairly unremitting sense of hopelessness.

The Blu-Ray comes with an audio commentary from the director and the cinematographer. You also get a collection of deleted scenes, an alternate opening and a musical performance. The trailer and making-of featurette are pretty basic. But, the A/V Quality is revolutionary as this has to be the best looking indie released on Blu-Ray yet. The cool blues of the film play well with a strong transfer that never shows a sign of DNR or Edge Enhancement. If that wasn’t enough, it’s matched by a DTS-HD 5.1 master audio track that never overpowers the amazing dialogue. I’d recommend a must-buy for all readers.