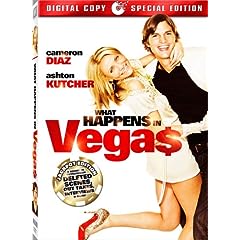 After a night of heavy partying in Vegas, two strangers (Cameron Diaz and Ashton Kutcher) wake up to realize, much to their displeasure, that they’ve gotten married, and now, each must vie for a $3 million jackpot won since their wedding. They try every trick in the book to get their hands on the cash, but as fate would have it, the more zealous they become about seizing the riches, the more passion they develop for each other.

“What Happens in Vegas” is not an insightful or intelligent movie, but it actually works. It’s a juvenile romantic comedy, perfect for those who like their love stories a little on the immature side. Ashton Kutcher and Cameron Diaz play their roles like teenagers trapped in adult bodies, spending most of the film as spouses scheming to make each other’s life a living hell. An uncredited Queen Latifah plays a marriage therapist who says the two were made for each other, despite having individual issues that need to be worked out. I immediately replayed the events of the film in my head and realized she was right; one is the other’s emotional equal, and both will willingly do what it takes to make sure they come out on top. While none of this makes for a funny movie, and while the story is completely predictable, it was still interesting to watch these characters interact with one another.

The setup is as follows. Joy McNally (Diaz) is a career-minded, people-pleasing stock trader from Manhattan, and Jack Fuller (Kutcher) is a fun-loving furniture maker from Brooklyn; when the former is dumped by her fiancée and the latter is fired by his father, they both escape to Las Vegas. They conveniently meet each other, spend a night on the town, have far too much to drink, and wake up the next morning as husband and wife. They both intend to annul the marriage as soon as possible … until Jack uses one of Joy’s quarters on a slot machine and wins a $3,000,000 jackpot. Both feel entitled to the money, so naturally, they end up in court back home in New York. The judge (Dennis Miller), disgusted at their behavior, freezes the money and sentences them to “six months hard marriage” with weekly marriage counseling; if they can get through it civilly, the money will be equally divided among them. Since Joy has no place of her own, she has no choice but to move into Jack’s disgusting bachelor pad.

Of course, both are determined to take their half of the money, just as both are determined to make each other miserable every step of the way. Joy purposely spends too much time in the bathroom, so Jack has the door removed. He removes the toilet lid so that she can fall in the next time she has to go. He pees into the kitchen sink when it’s her turn to do the dishes. Things take an interesting turn when Jack’s lawyer friend, nicknamed Hater (Rob Corddry), discovers a legal loophole: if Joy were unfaithful, Jack would be entitled to all $3,000,000. As fate would have it, Joy’s best friend, Tipper (Lake Bell), also discovers the loophole. Joy immediately hires a group of sexy young women to throw a spur-of-the-moment party in Jack’s apartment. Jack retaliates by seeking out her former fiancée, Mason (Jason Sudeikis), and making him jealous with news of her good new life.

The DVD is an amazing looking disc. The only problem I had was that the special features seemed rushed. Well, that and the FOX logo popping up every five seconds on the screener disc I was sent. But, I’m not complaining. I’m really not complaining. Rent it first!

0 0
Previous ArticleENTER TO WIN A COPY OF “GREY’S ANATOMY: SEASON FOUR”Next ArticleNBC ANNOUNCES GOLDEN GLOBE WINNER AND EMMY NOMINEE ANTHONY EDWARDS TO REPRISE HIS ROLE AS DR. MARK GREENE FOR ONE EPISODE OF ‘ER’ FOR ITS 15TH AND FINAL SEASON