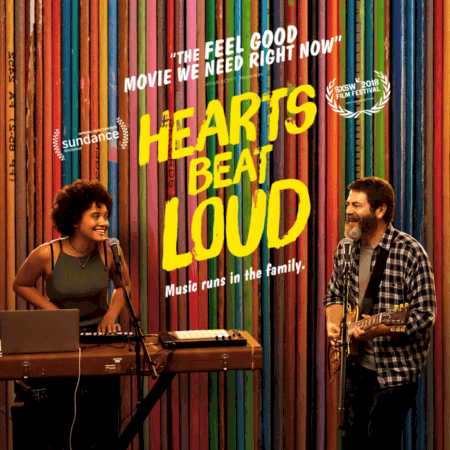 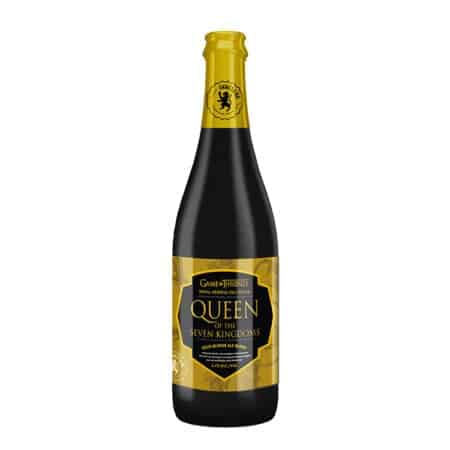 Helios and Matheson Analytics Inc. (Nasdaq: HMNY) (“HMNY”) and MoviePass Inc. (“MoviePass”), the nation’s premier movie theater subscription service and a majority-owned subsidiary of HMNY, today announced that HMNY has acquired Moviefone, an entertainment service owned by Oath Inc. (formerly, AOL Inc.) (“Oath”) which provides over 6 million monthly unique visitors full access to the entertainment ecosystem, from movie theaters to streaming services and all screens in between. As HMNY’s second acquisition in the consumer entertainment industry, the Moviefone acquisition represents another pillar in building out its content marketing strategy and advertising revenue platform for MoviePass. Oath will continue to sell Moviefone’s digital ad inventory and has taken an ownership stake in MoviePass through equity in HMNY in connection with the transaction. “This natural alignment between MoviePass and Moviefone will help us grow our subscriber base significantly and expand our marketing and advertising platform for our studio and brand partners,” said Mitch Lowe, CEO of MoviePass. “Moviefone has been a go-to resource for entertainment enthusiasts for years, and we’re excited to bolster its presence and bring this iconic platform into the entertainment ecosystem of the future.” Founded in 1989, Moviefone delivers the best in entertainment, including movie show times and tickets, trailers, TV schedules, streaming information, cast and crew interviews, photo galleries and more. Moviefone’s editorial coverage includes up-to-date entertainment news, trailers and clips, exciting red-carpet coverage and celebrity features. “This investment in digital content expands MoviePass’ reach further into multiple Hollywood touchpoints,” said Khalid Itum, VP, Business Development at MoviePass. “We believe the acquisition will allow us to connect studios and brands with potential new subscribers, capture their attention, and convert them into paying subscribers. We believe Moviefone will also allow us to provide relevant and appealing content to moviegoers while simultaneously increasing the value of the Moviefone brand.” “HMNY’s vision is to have MoviePass support the entire movie theater industry ecosystem– from distribution to exhibition and now, content,” said HMNY’s Chairman and CEO, Ted Farnsworth. “Above all, we believe the Moviefone acquisition will serve as another valuable source of revenue for HMNY and MoviePass,” concluded Mr. Farnsworth. “Moviefone provides users with full access to the entertainment ecosystem, from movie theaters to streaming services and on all screens in between, said Matt Young, VP Entertainment, Oath. “By bringing together MoviePass and Moviefone, entertainment lovers will enjoy the full suite of movie-theater subscription opportunities, discovering, interacting and sharing blockbusters, hit series and underground hits across the worldwide community of film and TV. Advertising partners will also have a more powerful and comprehensive vehicle to promote their films.”

WHAT: STUDIO GHIBLI FEST, a nine film monthly series of anime classics, continues with the “The Cat Returns” from the legendary Studio Ghibli creators of “My Neighbor Totoro” and the Academy Award®-winning “Spirited Away”, comes a charming and magical adventure that will delight the entire family. This special event will play in movie theaters nationwide for three days only on April 22,23 and 25.

Haru is walking home after a dreary day of school when she spies a cat with a small gift box in its mouth crossing a busy street, and she jumps in front of traffic to save the cat from an oncoming truck. To her amazement, the cat gets up on its hind legs, brushes itself off, and thanks her very politely. But things take an even stranger turn when later than night, the King of Cats shows up at her doorstep in a feline motorcade. He showers Haru with gifts, and decrees that she shall marry the Prince and come live in the Kingdom of Cats!

WHO: GKIDS and Fathom Events

WHERE: Tickets for “The Cat Returns” can be purchased online by visiting www.FathomEvents.com or at participating theater box offices. Moviegoers throughout the U.S. will be able to enjoy these events in more than 700 select movie theaters. For a complete list of theater locations visit the Fathom Events website (theaters and participants are subject to change).

LIMITED EDITION STEELBOOKS OUT MAY 15: BILL & TED’S EXCELLENT ADVENTURE AND THE ADVENTURES OF BUCKAROO BANZAI ACROSS THE 8TH DIMENSION

Shout! Factory will be releasing Steelbook editions of two cult-favorite films on May 15, 2018: Bill & Ted’s Excellent Adventure (30th Anniversary Edition Steelbook), and The Adventures of Buckaroo Banzai Across The 8th Dimension (Limited Edition Steelbook). Only 10,000 of each will be available, and they are available now on Amazon.com and ShoutFactory.com.

Customers ordering The Adventures of Buckaroo Banzai Across The 8th Dimension (Limited Edition Steelbook) from ShoutFactory.com will receive a free 18×24 rolled poster featuring our brand new artwork, while supplies last, and get it shipped two weeks early.

In Bill & Ted’s Excellent Adventure, the biggest concern for Bill S. Preston, Esq. (Alex Winter) and Ted “Theodore” Logan (Keanu Reeves), two totally excellent dudes from San Dimas, California, has been that their band, the Wyld Stallyns, “will never be a super band until we have Eddie Van Halen on guitar.” But now they’re on the verge of failing history class, and Ted’s father is threatening him with military school. To keep the Wyld Stallyns together, and save the future, they need to deliver an epic history report, so a messenger named Rufus (George Carlin) arrives in a time traveling phone booth to help them out. As they travel through history they pick up some new friends, like the “Bodacious Philosopher” Socrates, “One Very Excellent Barbarian” Genghis Khan, the “Short Dead Dude” Napoleon and “Noah’s Wife” Joan of Arc, and put on one outrageous presentation.

In The Adventures of Buckaroo Banzai Across The 8th Dimension, brilliant brain surgeon Banzai (Weller) just made scientific history. Shifting his Oscillation Overthruster into warp speed, he’s the first man ever to travel to the Eighth Dimension and come back sane! But when his sworn enemy, the demented Dr. Lizardo (Lithgow), devises a plot to steal the Overthruster and bring an evil army of aliens back to destroy Earth, Buckaroo goes cranium to cranium with the madman in an extra-dimensional battle that could result in total annihilation of the universe! Starring Peter Weller, John Lithgow, Ellen Barkin, Jeff Goldblum, Christopher Lloyd, Lewis Smith, The Adventures of Buckaroo Banzai Across The 8th Dimension  has developed a loyal cult following since its release in 1984.

Shout! Factory TV will partner with social video platform Twitch to host a 4-day marathon of the complete original series Ultraman Leo beginning Wednesday, April 18. Fans can tune in to watch all 51 episodes from the show’s original run daily from April 18-21 at 3 p.m. PT on Shout! Factory’s official Twitch channel.
Produced by Tsuburaya Productions, the creative team behind Ultraman, Ultraman Leo is the seventh entry in the Ultraman series. The Ultraman series is one of the most prominent tokusatsu superhero genre productions from Japan and has sparked a fandom of the Ultraman mythology across generations.
After being brutally marred by evil aliens, Dan Moroboshi (Ultraseven) takes under his wing a fierce young Ultra-like being from L-77, and christens him “Ultraman Leo,” to continue his mission to defend the Earth. Alien intergalactic slavers called Magma come to Earth in an attempt to find more slaves for their expanding evil empire. In response, the Ultra Warriors send Leo to protect the planet from this new threat.
Ultraman Leo’s fighting spirit is showcased across a season of epic monster battles, ultra strength and a dynamic defense of the planet.
All episodes of Ultraman Leo are also available on VOD at Shout! Factory TV.

In Red Hook, Brooklyn, a father and daughter become an unlikely songwriting duo in the last summer before she leaves for college.

The beloved Boxcar Children are headed to the silver screen! The new animated feature film THE BOXCAR CHILDREN – SURPRISE ISLAND hits theaters nationwide for a special one-day event on May 8.

This exciting after-school event is a partnership between Fathom Events, Shout! Kids, and Legacy Classics, and it will also offer moviegoers an exclusive introduction with actor Griffin Gluck and Director Dan Chuba explaining the process of adapting the book to film, and the process of animating. Moviegoers will be able to enjoy the film in approximately 700 select U.S. movie theaters. A complete list of theater locations will be available at Fathomevents.com. Tickets for THE BOXCAR CHILDREN – SURPRISE ISLAND will go on sale Friday, April 6, and can be purchased online or at participating theater box offices.

THE BOXCAR CHILDREN – SURPRISE ISLAND follows the adventures of the orphaned Boxcar Children as they spend an entire summer living on their Grandfather’s small, nearly uninhabited island. There they meet Joe, who is friendly and helpful, and inexplicably living on their island. Does their new friend have a secret?

THE BOXCAR CHILDREN – SURPRISE ISLAND is fun for the whole family, and is Dove approved for all ages. It is directed by Dan Chuba and Mark Dippé, and is produced by Legacy Classics and co-produced by Shout! Factory, Albert Whitman & Company and Blueberry Pictures. THE BOXCAR CHILDREN – SURPRISE ISLAND is the first of three new animated features to be adapted from the “The Boxcar Children” book series, as part of a partnership between Shout! Kids and Legacy Classics.

“The Boxcar Children” by Gertrude Chandler Warner is one of the best-selling children’s book series of all time. Having just marked its 75th anniversary, over 70 million books have sold world-wide. There are 150 books in the series, and over 1 million kids read the books in schools across North America every year. 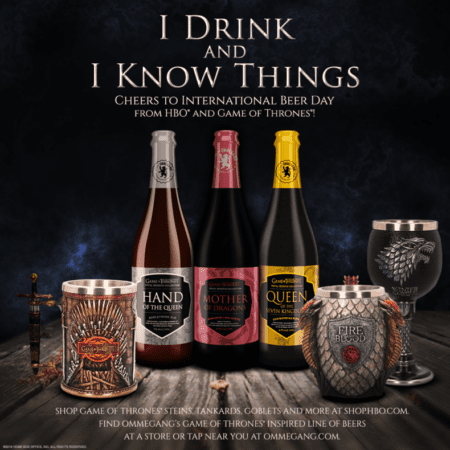 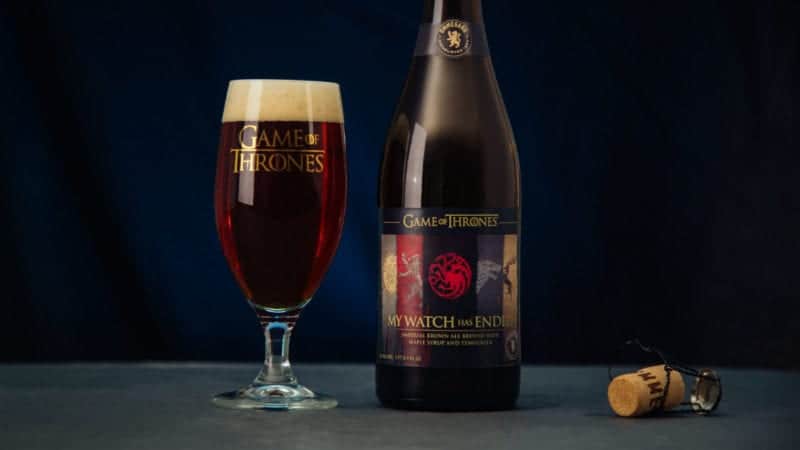 My Watch Has Ended, Final Beer to Celebrate the End of Game of Thrones, Available this Fall
July 13, 2019