Roar into new larger-than-life adventures with your favorite supercharged Trux in all-new episodes of DreamWorks Dinotrux Supercharged!  The Dinotrux find a new source of superchargers and suit up Dozer with upgrades, while Ton Ton tricks out in supercharge to participate in the “Doom Run” ore race.  Ty and the gang also meet new Trux in the Crater like Goldtrux, Liftasaurs, naughty Speed Demons, Liftasaurs, and even D-Struct’s meaner older brother!  Level-up with the new supercharged builds, only on Netflix March 23rd!

Celebrate 25 years of a timeless family comedy as Twentieth Century Fox Home Entertainment teams-up with Louisville Slugger Museum & Factory to bring THE SANDLOT to life.  The hit movie that will be “For-Ev-Ver” remembered with pop-culture touchstones like The Beast, Wendy Peffercorn, and, “You’re killin’ me, Smalls!” will be on full display for a mini-exhibit showcasing authentic props from the movie, artwork, and behind-the-scenes photography. The special show runs March 31 thru September 9.

In this beloved family-favorite movie, directed by David M. Evans, it’s the early 1960s and fifth-grader Scotty Smalls (Tom Guiry) has just moved into town with his folks (Karen Allen and Denis Leary). Kids call him a dork — he can’t even throw a baseball! But that changes when the leader of the neighborhood team recruits him to play on the nearby sandlot field. It’s the beginning of a magical summer of baseball, wild adventures, first kisses and fearsome confrontations with the dreaded beast and its owner (James Earl Jones) who live behind the left field fence. Soon, nine boys have become best friends, Scotty is part of a team, and their leader has become a local legend in this hilarious and warmhearted comedy.

Critical acclaim for the movie focused on its charm and nostalgia, and the film has become an often-quoted cult hit. THE SANDLOT ranks in the Top 10 Best Baseball Movies of all-time by critics, sport fans and movie-lovers, including: IMDb; Sporting News; Baseball America; Maxim; Bleacher Report; SportsNation/ESPN and others.

The mini-exhibit features original props, some on public display for the first time. Memorable items from the movie showcased in the exhibit include:

In addition to the props, the original storyboard binder with amazing hand-drawn artwork will be shown, along with a copy that guests can page through. Behind-the-scenes photography provides an exclusive glimpse into the magic of Hollywood film-making.

Some of the items on display come directly from the personal collection of writer-director David M. Evans, who also did the voiceover for the film.

“Louisville Slugger Museum & Factory is a great place to celebrate THE SANDLOT’S 25th Anniversary,” said writer-director David M. Evans. “Not only did some of the props originate from their factory, the Louisville Slugger brand evokes the same kind of fondness and nostalgia as the movie. I’m excited that hundreds of thousands of people will be able to enjoy this special show at such a fitting location,” he added.

The bats produced for the 1993 movie were carefully crafted replicas of early 1960s models.

“We have made baseball bat props for some of the greatest movies of all-time, so we were delighted when Twentieth Century Fox Home Entertainment contacted us about creating an exhibit for such a beloved classic like THE SANDLOT,” said Anne Jewell, VP/Executive Director of Louisville Slugger Museum & Factory. “After 25 years this movie has stood the test of time. Compared with the hundreds of baseball movies made since the 1800s, THE SANDLOT ranks among the best-ever and most-loved. We’re thrilled to share its story and artifacts with our guests,” she continued.

“Legends Never Die!” The Sandlot Celebrates 25 Years” joins an already impressive line-up at Louisville Slugger Museum & Factory. Admission to the museum includes an award-winning factory tour where guests can watch baseball bats being made, engaging exhibits historic memorabilia, the World’s Biggest Baseball Bat, and more. As an added bonus, all guests receive a free souvenir mini-bat at the end of their factory tour. The Louisville landmark conducts factory tours seven days a week, and guests are guaranteed to view bat production on each tour.

In addition to the exhibit, Twentieth Century Fox Home Entertainment is releasing a special 25th Anniversary collector’s edition of THE SANDLOT on March 27.  This crowd-pleasing collection includes a set of 10 custom Topps® baseball cards — featuring Scotty Smalls, Benny “The Jet” and the rest of the ragtag roster — created exclusively for this release. The major-league treatment continues with an all-new booklet filled with behind-the-scenes photos from the film director’s personal archive and an all-new, full-color poster.

Warning: Incoming Game. Shout! Factory TV will partner with social video platform Twitch to host a 24-hour marathon of the complete original series ReBoot on March 28. Ahead of the show’s upcoming reboot, fans can join the ReBoot revolution and watch all 47 episodes from the original four-season run, alongside special features Fast Forward: The Making of ReBoot and Alpha Numeric: Looking Back at ReBoot with Co-Creator Gavin Blair. The marathon begins Wednesday, March 28 at 3 p.m. PT on Shout! Factory’s official Twitch channel.
Known as the very first completely computer-animated TV series, ReBoot debuted in the United States on ABC’s Saturday-morning block in 1994 and has captured the hearts and imaginations of kids and adult gamers ever since.
Welcome to Mainframe. Home to Guardian Bob, formatted to mend and defend. Join the fast-paced action and adventure as Bob and his friends – Dot, her brother Enzo and his trusty dog Frisket – fend off attacks from the superviruses known as Megabyte and Hexadecimal in their relentless pursuit of chaos and the destruction of Mainframe.
The show’s unique setting inside a computer allows the characters and storylines to mine the references to computers and video games for all they’re worth, giving the show its humorous edge. The innovative animation, insider humor and high octane action combine to give viewers a lot of binary bang for their buck.
All episodes of ReBoot are also available on VOD at Shout! Factory TV.

It was revealed today that Academy Award® nominee Phyllis Nagy will write and direct a film based on the haunting, non-fiction best-selling book, “The Vanished” for CJ Entertainment.

Written by journalist Léna Mauger and photographer Stéphane Remael, “The Vanished” tells the powerful true story of the disappearance of people in Japan. Every year, nearly one hundred thousand Japanese vanish without a trace. Known as the johatsu, or the “evaporated,” they are often driven by shame and hopelessness, leaving behind lost jobs, disappointed families and mounting debts.

Mauger and Remael’s quest to explore the stories of the johatsu weaves its way through a Tokyo neighborhood so notorious for its petty criminal activities that it was literally erased from the maps, reprogramming camps for subpar bureaucrats and businessmen to become “better” employees, and the “suicide” cliffs of Tojinbo, patrolled by a man fighting to save Fukushima in the aftermath of the tsunami.

The film will remain true to its source material in that it will be set in Japan.

As exotic and distant as their stories might appear to an outsider’s eyes, the human experience shared by the interviewees remains powerfully universal, which is why CJ Entertainment sees such potential in making and positioning the film for a wide global audience.

“The stories and images of the johatsu that are woven through Lena Mauger and Stephane Remael’s remarkable book moved me profoundly. Those who are disenfranchised, who have no voice, who are, in fact, wiped clean from the rolls of our collective society—these narratives, though specific to Japan, increasingly find their terrible parallels in all corners of the world. And these global connections and resonances draw me powerfully to this tale. I can’t wait to begin to dive in with this material with CJ,” said Nagy.

CJ Entertainment’s Francis Chung said, “With “The Vanished” we had always wanted to tell the story in an intricate yet delicate fashion. Everything about Phyllis, from her storytelling approach and style, to her research and investment into the material, makes her the perfect writer and director for this project. We’re thrilled to be working with her and know audiences will ultimately be treated to a masterfully crafted story for the big screen.”

In addition to “The Vanished,” Nagy is currently adapting best-selling novelist Patricia Cornwell’s first Scarpetta novel, POSTMORTEM, which she will also direct.

The deal for Nagy to pen “The Vanished” screenplay is the second major writer attachment for CJ already this year. Last month, CJ closed a deal with Academy Award® winner Geoffrey Fletcher to write the adapted screenplay for an English language remake of the popular horror film “The Housemaid” – a project CJ is also developing, financing and producing.

The deal was negotiated by Adam Mehr at Pryor Cashman on behalf of CJ Entertainment. Phyllis is represented by UTA and Casarotto Ramsay.

Opens in Theaters June 22nd, 2018
Starring:
Mackenzie Davis (Tully, “Halt and Catch Fire,” Blade Runner 2049, That Awkward Moment)
Alia Shawkat (“Arrested Development,” “Search Party”)
Haley Joel Osment (The Sixth Sense, Pay It Forward)
Carrie Coon (“The Leftovers,” FX’s “Fargo”), Alex Russell (Unbroken, Chronicle)
Written & Directed by: Christian Papierniak
Riot grrrl rocker and shameless hot mess Izzy wakes up hungover AF to find out that her ex-boyfriend is celebrating his engagement to her ex-best friend tonight at a bougie party across town. Enraged and desperate, Izzy embarks on a frenetic quest across Los Angeles to break up the party in order to fulfill what she believes to be her destiny … before it’s too late. A favorite from the festival circuit, Izzy Gets The F*ck Across Town is a delightfully chaotic indie comedy that showcases the absurdity and mayhem that is Izzy’s life.
RT: 86 minutes
www.IzzyGetsAcrossTown.com

Tribeca Film Institute and Charitybuzz are bringing screen legends Robert De Niro and Al Pacino back together for a once-in-a-lifetime experience. The highest bidder and their lucky guest will join the actors for a private lunch, courtesy of De Niro in New York City. The proceeds will benefit the Tribeca Film Institute, which provides funding and resources to diverse groups of exceptional filmmakers and media artists, empowering these storytellers to be catalysts for change in their communities and around the world. The auction will launch on Thursday, March 22 at 9 AM EST, and the bidding will close on Thursday, April 5 at 3 PM EST.

Arguably two of the most talented actors of their generation, De Niro and Pacino are responsible for countless classics of American cinema including The Godfather films, Raging Bull, Taxi Driver, The Deer Hunter, Goodfellas, Serpico, Dog Day Afternoon, Scarface, and Scent of a Woman. They have three Academy Awards between them and have been nominated twelve times.

Besides The Godfather: Part II, they have appeared in two other films together – Righteous Kill and the cult classic, Heat. They have recently wrapped production on their latest collaboration, The Irishman with Pacino playing Jimmy Hoffa and De Niro playing his reputed assassin, Frank Sheeran. The film was directed by Martin Scorsese, co-stars Joe Pesci, and is due to be released next year.

Charitybuzz is a leading online charity auction platform, offering once-in-a-lifetime experiences and incredible luxury packages to its community of more than 200,000 high-net-worth bidders while raising funds for charitable causes around the globe. To date, Charitybuzz has raised nearly a quarter of a billion dollars for thousands of non-profit organizations. Its roster of celebrity supporters includes Sir Paul McCartney, Tim Cook, Beyoncé, Mick Jagger, Warren Buffett, Taylor Swift and Bruce Springsteen. Charitybuzz is a member of Charity Network. Named one of Fast Company’s 2017 Most Innovative Companies, Charity Network is also parent company to Prizeo, an online sweepstakes-for-good platform; Chideo, a cause-meets-entertainment content company; and Global Philanthropy Group, a strategy consulting firm for cause. To learn more, please visit www.charitybuzz.com.

Tribeca Film Institute to Receive $65,000 Grant from the National Endowment for the Arts
May 17, 2018 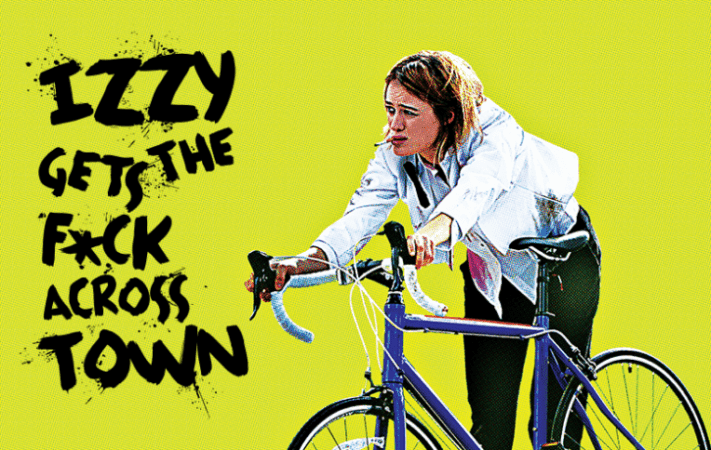