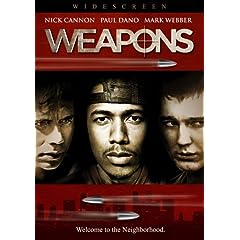 Weapons presents a series of brutal, seemingly random youth-related killings over the course of a weekend in a typical small town in America,and tragically reveals how they are all interrelated.

Presented in a contorted time frame that serves no real purpose, Weapons follows the activities of a group of hate-filled youths as they spend one day and one night doing simply terrible things to one another. This one’s accused of raping that one, which means this other one is all hot for revenge, while these three different ones do some drugs and spit virtual bile at each other. Meanwhile the only halfway sympathetic character in the movie (and I do mean “only”) is a rather stupid young woman who harbors a crush for one particularly vile young man … because in a world filled with anger, abuse and hatred, you gotta take what you can get, right? Jeez.

There’s not so much a “plot” as there is an “occurrence,” one that involves a false rape accusation that quickly snowballs into something pretty damn ugly. At most points Weapons feels like a highway road accident; you watch because there just might be something shocking and violent … but you’re never even close to becoming invested on an emotional level. It’s a base and ghoulish sort of reaction, but that’s pretty much what Weapons feels like: you’re not for one second given a viable reason to care about these characters, which means the movie quickly devolves into a series of arguments, fights and schoolboy insults that grow more than a little wearisome as the minutes tick on by.

The DVD sports amazing A/V Quality for an indie flick. However, there’s no special features. There’s only the quality film that not a lot of people have seen outside of its IFC airings. Kudos to LionsGate for taking the time to release this powerful film. It’s worth a rental, at least.