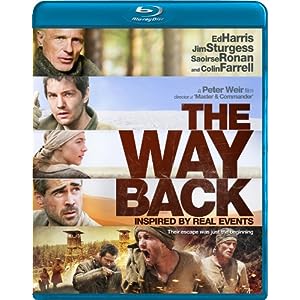 Four-time Oscar nominee, Ed Harris (Apollo 13), Jim Sturgess (Across the Universe) and Oscar nominee Saoirse Ronan (Atonement) and Colin Farrell (In Bruges) star in this epic saga of survival from six-time Oscar-nominee Peter Weir (Witness, Master and Commander: The Far Side of the World). Inspired by an incredible true story, The Way Back begins in 1940 when seven prisoners attempt the impossible: escape from a brutal Siberian gulag. Thus begins a treacherous 4,500-mile trek to freedom across the world’s most merciless landscapes. They have little food and few supplies. They don’t know or trust each other. But together, they must withstand nature at its most extreme. Their humanity is further tested when they meet a teenage runaway who begs to join them on their quest. A compelling testament to the human spirit, this gripping wilderness adventure is “Peter Weir at his hypnotic best”

“The Way Back” is the story of a small group of people escaping from a Siberian Soviet prison, part of the “Gulag” in wartime and walking 4000 miles to freedom looked a trifle grim in the trailer, but Peter Weir has managed to produce a rather beautiful film out of it, using Bulgaria and Morocco as locales rather than Siberia and the Gobi desert. Only Darjeeling in India plays itself. My only trouble with it is the rather uneven character development. The story lends itself to ensemble playing but we learn little about two or three of the walkers. In the case of the lead character Janusz (Jim Sturgess) who is the source of the story this is explicable as we are seeing the others though his eyes, but it has to be said that both “Mr Smith” and the Girl (Saiorse Ronan) leave a lasting impression.

I know there is some doubt as to the authenticity of the story, taken from a 1955 book by Slavimir Rawicz a former Polish army officer, and indeed what the group are supposed to have done looks impossible but that’s not a problem, because the relationships ring true. It is remarkable how an almost random collection of individuals, including one with a very unsavoury past, can, driven by sheer necessity, wind up functioning as a team. Partly this is due to the leader actually having some navigational knowledge and therefore inspiring confidence in the others. Mr Smith remarks early on that the Janusz has a serious weakness; he is kind, but when the chips are down we see that even the hard-bitten Mr Smith is capable of compassion.

Prison escapees traveling thousands of miles of the Eurasian landmass with minimal gear face multiple dangers, from malnutrition-caused blindness to mosquitoes to snakes to dehydration. Some succumb, and die en route. You can’t help but bet the same horrible game of chance that Valka proposes: who will die next? And will his meat be tender – that is, will we resort to cannibalism? A crew member falls. Surviving companions, in stunning testimony to their own humanity, take the time, burn the calories, devote the effort, to fashioning makeshift graves, and funerals.

The Blu-Ray comes with a production featurette and trailer. Seeing as how it was better than a lot of older Peter Weir work, I fully expected to hear a commentary. Sadly, the film bombed and we’re lucky to be receiving HD treatment for a film of this quality. The DTS-HD 5.1 master audio track still blows away a lot of recent releases from Image Entertainment. Still, I did notice some slight digital noise on the transfer. Oh well, it’s still worth a purchase.

0 0
Previous Article“HANNA” MADE A TON OF MONEY OVER THE WEEKENDNext Article“South Park: The Complete Fourteenth Season Uncensored” DVD And Blu-ray Arrives In Stores On Tuesday, April 26