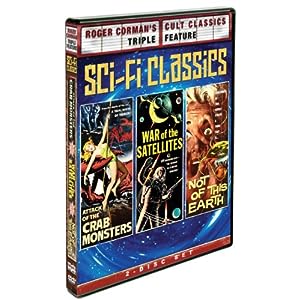 An “unknown force” declares war against planet Earth when the United Nations disobeys warnings to cease and desist in its attempts at assembling the first satellite in the atmosphere.

“War of the Satellites” was produced by Roger Corman because he knew he could get a deal (funding) from his distributor by promising a film with the then hot buzz-word, “satellite”, on the marquee. His plan worked and the film was rushed together. By then, Corman had a number of capable people he could count on to pull it off. Discount the war-surplus and junkyard props and and the hardly scientific premise and “War of the Satellites” turns out to be fun and a rather credible popcorn epic. It was released on a double bill and the title brought in the expected crowd.

The brass tacks involve aliens take over earthlings in order to sabotage our space program, particularly the satellites. Roger Corman’s strength was making something out of nothing and this film is no exception. He pulls off some neat ideas and manages to make us so interested in the film we forget how silly some of it is. I think it only runs a little over an hour so he gets right down to business.

The DVD comes bundled with two other films. The transfer for this flick is taken from a British master print and remastered. This is the sole flick not to get a commentary, but you can enjoy the Roger Corman retrospective featurette bundled into the mix. In the end, while it’s not an essential Corman flick…I’d recommend it for a rental due to its quirky nature.