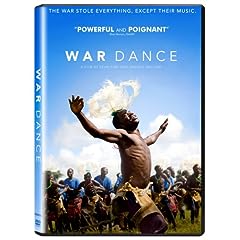 IF YOU LIKE THE FILM, PURCHASE IT AT SHINE GLOBAL BY CLICKING HERE!

Set in civil war-ravaged Northern Uganda, this Best Documentary nominee for the 2008 Oscars follows the lives of three youngsters who attend school in a refugee camp and find hope through a rich tradition of song and dance. Coming from a world in which children are abducted from their families and forced to fight in the rebel army, these kids give it their all when they travel to the capital city to take part in the prestigious Kampala Music Festival.

Focusing on three children within the Patongo refugee camp of northern Uganda, all of the kids have lost at least one parent, sibling or family member to the horrors of the war, and have been forced into this government protected camp for basic survival. Life is dank, depressing, and full of fear. Until one day the children discover that their little school has qualified for the finals at the annual Kampala Music Festival. And with them will go Dominic, a boy forced into being a child soldier for the rebels and desperately trying to locate his lost brother. A gripping scene between himself and a rebel leader tells Dominic much of what he already suspected. Nancy, a tough young lady, will go the Kampala, too. And with her she brings the hopes and dreams of her father who was hacked to death by machetes (the visit to his grave is sure to have many reaching for the tissue box). Then we have Rose, the soft-spoken one who is obviously in a funk of depression. But to watch her dance is to see the lights burst forth from her eyes.

It’s a modern David and Goliath tale, one can’t help but see the infiltration of Christianity on these people’s lives, too. Their clothing, their “prayers”, and many other aspects speak to the westernization of their culture. One of the competition categories is even called “Western Choral Music.” But the big winner in the categories is obviously the native dance sequence where Dominic shines as the xylophone player, Nancy dances and spins with delight, and Rose comes back to life. The other schools, initially sneering at this “tiny school from the north”, begin to respect them.

The DVD is an amazing release that shows off a part of the world that tends to get ignored. It’s been accused of being two documentaries in one, but the focus on the kids is air-tight. It’s a wonderful piece of work and one that demands your attention. That’s why I recommend it for a blind buy. The DVD can also be purchased at the Shine Global website.