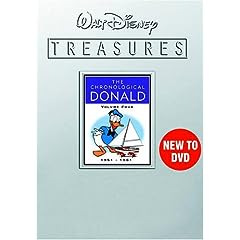 In this final volume, our chronicle of Donald’s solo-starring shorts wraps up with some of his rarely seen, feather ruffling adventures from 1951 through 1961. And, for the first time on DVD, Donald’s CinemaScope cartoons are presented in their original widescreen format. This collection of classics includes two of Donald’s Academy Awardr nominated Best Shorts — “Rugged Bear” (1953) and “No Hunting” (1955); a retrospective of Donald’s career in comic books; and a storyboard presentation for an unproduced Donald Duck cartoon pitched by famed Disney animator Eric Goldberg. From bit player to superstar, Donald gave voice to the frustrations of everyone and in the process endeared himself to the world. Featuring exclusive introductions by film historian Leonard Maltin, this is a timeless collection from generations past for generations to come.

The Donald collection finally comes to an end with the era I’m more familiar with. The crass commercialization of the character meeting the last of the theatrical releases. More people from my age bracket remember Donald in Mathmagicland or The Mickey Mouseworks shorts. Plus, it’s not that so many of these shorts are making their DVD debuts. That should be the point of the Walt Disney Treasures releases.

What still kills me are the From the Vault releases. Warner Brothers had more offensive shorts from the past decades, but they managed to handle the material in a more mature manner. It speaks volumes to the difference between the two studios as you watch them try to navigate cultural sensitivity. But, luckily they get past it for the most part. It’s just sad that it’s still an issue for some studios.

Fans of Chip and Dale, J. Audubon Woodlore, Humphrey Bear, etc., will thrill in the addition of these great cameos on top of the rest of the Donald Duck shorts. These are the shorts that I mostly think of when talking about vintage Disney shorts. I sure hope that Disney remembers to release the 3 solo shorts by Chip and Dale w/o Donald. Also, in the future, I hope they will release the educational Jiminy Cricket shorts that we all loved growing up in elementary school and watching the old Disney Channel of the mid-80’s, before it was messed up by the powers that be. The A/V Quality is solid as could be expected. Throw in the collectible factor of the limited product and you’ve got a hit. Buy it already.

The following shorts are included: