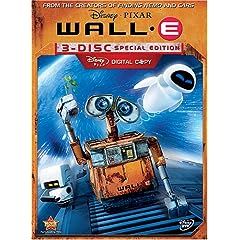 The highly acclaimed director of FINDING NEMO and the creative storytellers behind CARS and RATATOUILLE transport you to a galaxy not so far away for a new cosmic comedy adventure about a determined robot named WALL-E. After hundreds of lonely years of doing what he was built for, the curious and lovable WALL-E discovers a new purpose in life when he meets a sleek search robot named EVE. Join them and a hilarious cast of characters on a fantastic journey across the universe. Transport yourself to a fascinating new world with Disney-Pixar’s latest adventure, now even more astonishing on DVD and loaded with bonus features, including the exclusive animated short film BURN-E. WALL-E is a film your family will want to enjoy over and over again.

Time and time again the PIXAR people hit a home run with their fresh ideas. They have done it here with a story that 6-13 year olds will love as well as a sci-fi story line adults stimulating to adults. WALL-E (Waste Allocation Load Lifter- Earth Class) is the last of his kind- one of the thousands of robots who were left behind to clean up the world we’ve trashed. It seems that humans, rather than attend to their own problems, clean-up their own mess, have split. The lovable robot is very diligent in his duties to clean up the earth. He goes about his daily tasks in a very workman like quality, occasionally taking a break to manipulate an object, ponder it’s function. Since WALL-E and a friendly insect are the only ones left there is no dialog for the first 40 minutes or so. Even with that deficit the movie is utterly engaging, the animation superb. Eventually WALL-E falls for a female? robot named EVE (Extra Terrestial Vegetation Evaluator)who arrives on earth to look for life.

WALL-E (Ben Burtt) is the last operating robot on Earth. As for the human race, they left 700 years ago, when the huge amounts of self-produced trash caught up with them. WALL-E’s task is to clean up the planet for the return of the humans. However, after being left on his own for so long, WALL-E has developed a personality. He is curious about many of the items that he finds whilst compacting trash, such as an old tape of the musical “Hello Dolly!” But he is also becoming lonely, which is understandable for someone who only has a friendly cockroach for company.

However, all of this changes with the arrival of EVE (Elissa Knight). Thought EVE is initially hostile towards WALL-E, this doesn’t stop him from becoming smitten with her and trying to connect with her. However, EVE has come to Earth on a classified mission. Once that mission has been completed, EVE shuts down and waits to be taken back from whence she came. When her transport arrives, WALL-E can’t bear to lose his friend and sneaks aboard. His search for EVE brings him into contact with the remainder of the human race, who have been taking refuge on a huge spaceship and who have become excessively reliable on machines to supply their every need. They don’t even walk. However, WALL-E’s arrival sets many events in motion which may help the human race to return to normality…

First of all, WALL-E’s animation is flawless. However, as with the rest of the film, there is also a sense of risk and bravery which adds extra dimensions to the glorious animation. The first moments in the film, which show us the beauty of the stars before swooping down to gaze upon a barren and deserted Earth, are so detailed and emotionally engaging that you are immediately sucked into the tale without any hesitation. Even when the story becomes more traditional (that is in no way an attack on the film), the creativity and power of the film’s visuals never falter.

The main focus of the plot is on the growing affection between WALL-E and EVE. This is one of the most moving romantic relationships in years. No, they’re not even human. But watching the initial conflict of EVE’s determination and WALL-E’s innocence slowly mix into love and companionship is magnificent. The scenes between the two characters on Earth are simply wonderful, perfectly paced and confident in the set-up of this unusual couple. However, the best scene comes in the second half, when WALL-E and EVE dance through space together. Everything in this scene is perfect, the comedy of watching WALL-E propel himself through space by use of a fire extinguisher, the lovely visuals, Thomas Newman’s marvelous score and the interaction between the two characters. When WALL-E looks likely to float off into space after the fire extinguisher runs out, EVE flies in and scoops him up in her arms. This scene is pure cinematic genius. Overall, there is a humanity and grace of execution in the relationship between WALL-E and EVE which elevates it far beyond the emotional impact of other romantic relationships.

Cinematic Genius can also be applied to the iconic character of WALL-E and the fantastic direction by Finding Nemo director Andrew Staunton. Staunton shows that he is willing to inject some risk into his movie-making if it makes a better film. This decision pays off magnificently here. Staunton has lovingly constructed this film with invention, depth and bravura, and in doing so has crafted a piece of movie making which is likely to go down as at least a family classic. Not only will children be enthralled by the sheer brilliance of this film, but other audiences will also be open to its bewitching magic.

The latest Pixar shorts “Presto” and “Burn-E” have been included for your viewing pleasure. There’s also a ton of special features that detail the making of the movie. A lot of people will skip the production featurettes, which seems to be expected. But, don’t forgo “The Pixar Story”. It’s a compelling documentary that got way too limited of a theatrical run last year. If you’ve ever cared about animation in America, you need to see this Iwerks documentary.

“Wall-E” is perhaps the DVD to beat for 2008. Hell, throwing “The Pixar Story” on as a bonus feature seems like visual overload. But, none of that matters. Coming up over the weekend, we’re going to be adding a Blu-Ray vs. DVD comparison. I’ve had too many readers bitch and moan about how they can’t tell the difference between the two formats. I’m going to make you compare side by side until the point gets driven home. This is a recommended buy.

What sets this DVD aside from the Blu-Ray is the incredibly shitty packaging. I’m all about going green and saving the Earth. But, this is ridiculous. This message also goes out to FOX regarding those Futurama cases. If I break the disc getting it out of the case, I can’t watch the movie. Anything that hinders my ability to watch the movie makes me mad. Also, asking people to pay more for a digital copy that expires in a year was kind of shitty too.