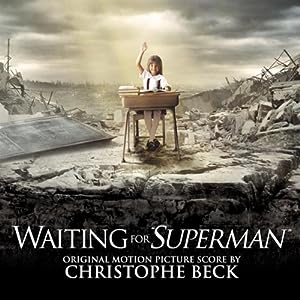 The documentary explains the broken public education system in the U.S. Beck’s original score emotionally supports the storyline and the plight of the american families profiled in the film. Beck combined whimsical instrumentation such as pizzicato strings and bouncy percussion with simple, intimate instrumentation such as a single guitar or piano to balance a lively presentation with the harsh reality of these children’s lives.

Film music intends to make the view feel something, if only subconsciously, about the subject being viewed. But in a documentary, which strives to tell a story, albeit a non-fiction one, is music still manipulative, or does it fill some other void. The scores real high-water marks are in the 18th and 19th tracks, Roll Out and The Lottery, appropriate close to the close of the album. These lengthy cues actually let Beck do a bit of musical exploration, weaving in and out of tense guitar rhythms and plaintive piano chords. These arent powerhouse cues, but they were never meant to be.

Filmmaker Davis Guggenheim reminds us that education “statistics” have names: Anthony, Francisco, Bianca, Daisy, and Emily, whose stories make up the engrossing foundation of WAITING FOR SUPERMAN. As he follows a handful of promising kids through a system that inhibits, rather than encourages, academic growth, Guggenheim undertakes an exhaustive review of public education, surveying “drop-out factories” and “academic sinkholes,” methodically dissecting the system and its seemingly intractable problems. What Beck has managed to do with this setup is provide an almost invisible backdrop, as we slowly descend into how the American educational system is failing its students.

The powerful tracks don’t really begin until Track 5 “Anthony”. The track is driven by guitar and piano painting kind of a hopelessness about it that is monotonous but enticing. It sets the tone for what will follow and what will be paid off with “The Lottery”. It is this constant shake-up that leads me to believe that “Waiting for Superman” will easily take a Best Original Score nomination at the upcoming Academy Awards. Remember, kids…we’re just two weeks away from the nominations being announced on that Tuesday morning.