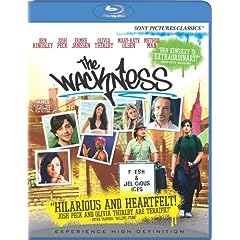 Jonathan Levine’s nostalgic reverie recreates a more innocent New York. In 1994, the Twin Towers watch over Manhattan, and Rudolph Giuliani reigns as mayor–not a bestselling author or presidential candidate. Recent high school grad Luke Shapiro (sleepy-eyed Josh Peck, Drake and Josh) plies the kind of trade Giuliani seeks to discourage: dope dealing. Otherwise, though, Luke’s not such a bad kid. He sees a therapist, the pot-smoking Dr. Squires (Sir Ben Kingsley), and nurses a crush on the doctor’s flirtatious stepdaughter, Stephanie (Juno‘s Olivia Thirlby). Hip-hop fills the air, and Luke spends his days grooving to Nas, the Notorious B.I.G., and A Tribe Called Quest, while selling cannabis out of an ice-cream cart (Wu-Tang rapper Method Man plays his Rasta supplier). As the summer heats up, Luke and Stephanie grow closer, while Squires and his wife, Kristin (Famke Janssen), drift apart. Meanwhile, Luke’s family faces eviction if his father’s fortunes don’t improve, and he finds himself torn between the hot girl, the bummed-out shrink, and a job that could land him in the clink for a good long time–or save the Shapiros from moving to New Jersey. Though Levine (All the Boys Love Mandy Lane) doesn’t judge his law-breaking protagonist, he does suggest that love can make a smart guy lose his head just as easily as lust–and even a trained psychiatrist can’t always tell the difference. With Mary-Kate Olsen (Weeds) and Jane Adams (Happiness) as the spaciest of Luke’s spacey customers.

Its the summer of 1994 in New York City, and then Mayor Giuliani has just begun to kick his “Clean Up New York” laws in to effect. In the eyes of the Woodstock fans, he’s the anti-Christ finally forcing them to reckon with their self-destructive choices of the past and present. The heat is on both literally and figuratively that summer after Josh’s graduation. He’s set to attend his ‘safety’ school in the fall, and has nothing but his summer ‘job’ and the conquest of his virginity to fill his days. Toward those ends, his summer ‘job’ gains urgency when he discovers his father’s lost everything at work and they may have to relocate to the New Yorker’s hell on earth, aka “Jersey”, and as for the virginity, which he claims is not virginity per se, his attention turns toward Stephanie Squires who is equally otherwise unoccupied all summer with her boyfriend off on a trite Eurotrip.

Mr. Levine’s version of the patently unoriginal coming of age story of a teenage boy would also fall into the patently unoriginal category were it not for the fact that he’s charged this classic metamorphosis with serving as a metaphor for escaping all that’s wrong with life in general. His thesis focuses on the progression of life from something deliriously, deliciously, devilishly daring into something which dominoes down a dreadful, dreary, diabolical, dead end. In youth, he premises we are truly free to be ourselves and, frankly, figure out who we are or are not but have fun with both, and then as we age into oblivion of pointlessness, we lose all sight of that which made life really worth living. Again, that, in and of itself, isn’t that original. The original piece here comes in how he uses the relationship between Luke and Dr. Squires to unravel the mystique of each man’s position on the continuum allowing and ebb and flow as they guide the other back on to a path of a more meaningful existence.

The Blu-Ray does a great job of showing off this seldom seen indie flick. The 1080 bump really doesn’t bring anything new to the table with this smaller movie. But, the upgraded special features help to show off how Levine reshaped the world of 1994. Plus, Gandhi tries to diddle one of the Olsen Twins. That’s pretty awesome.