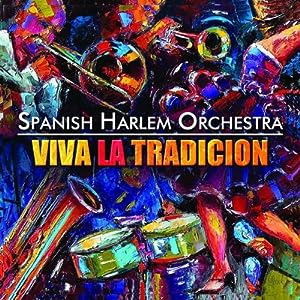 Viva la Tradicón, the newest album from the Grammy winning 13-piece collective Spanish Harlem Orchestra is a 12-track collection that takes up where its three predecessors left off – stirring the pot of mid-20th century influences and keeping the salsa simmering for current and future generations. Now in its tenth year, the Spanish Harlem Orchestra is one of the most formidable and authentic Latin jazz combos of today. Yet for all of its appeal with contemporary audiences, the group’s success is actually rooted in the past. A lively and energetic affair, Viva la Tradición draws on inspiration from the music’s history and enduring traditions. The collection is comprised largely of original compositions and arrangements of classic salsa tunes by bandleader/founder Oscar Hernandez. Hernández is one of the most respected musicians in Latin & Latin Jazz music.His track record & discography are extensive. On the new CD he enlists the support of veteran composer and arranger Gil Lopez on three of Lopez’s compositions (“Son De Corazon,” “Nuestra Cancion,” and “Regalo De Dios”.

Spanish Harlem, also known as East Harlem or El Barrio, located in the north-eastern part of the Manhattan borough of New York City, has one of the largest, if not the largest Latino population in New York City. Filled with Latino culture, Spanish Harlem is home to a community of musicians that were inspired by their culturally rich environment that helps give the Big Apple its reputation. The album is produced by bandleader and legendary pianist Oscar Hernandez on Concord Picante Records, “Viva La Tradicion” blends incendiary salsa tunes with impeccable latin jazz cuts.

I’m a fan of the Spanish Harlem Orchestra via Paul Simon and Ruben Blades’ efforts to garner attention for them. But, it’s not like I can say that I’m a huge fan of their music. The Latin explosion passed me right by and I was left wondering what was the big deal. “La Salsa Sura” was an energetic first track for an album that is seemingly trying to reach across the music aisle and snare new listeners. Full of horns and lively energy, you almost feel that your speakers are about to burst. Oscar Hernadez leads the Orchestra with impeccable timing, as every note falls into place.

The lackluster moments come from Gil Lopez’s offerings such as “Nuestra Cancion”. Lopez tries to go slightly experimental with a form that of music that’s still off-putting to the majority of American listeners. Instead of embracing Hernandez’s approach with the album, Lopez makes you work for the joy. Such approaches are the reason why Steely Dan has never advanced beyond a critical favorite. Music in the modern era is such a weird business where any attempts to break the mold are met with a slapped hand. It’s not to say that I’m against musical experimentation, it’s just that you save that kind of stuff for the fans. This is supposed to be a traditional album that’s open to all audiences.

When you finish the CD, you won’t have an immediate reaction to it. Give it a few days and let time works its magic. If you still come back to it and you can’t appreciate the Hernandez/Lopez colloboration, then you’re not going to be won over. All I can say is that you might want to start on stuff from Tito Puente and move on from there. For the Latin fans out there, it’s a must-buy. Name the last time that the Spanish Harlem Orchestra produced an album that was less than stellar. You can’t and hopefully you’ll never be able to name one.