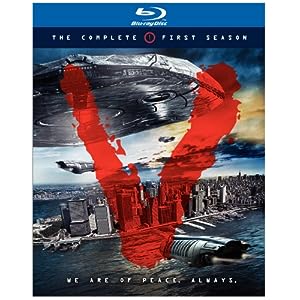 Who are they, and what are they up to? These are the questions Earth inhabitants pose in their first encounter with an alien race called the Visitors in this ABC sci-fi drama based on the 1980s miniseries V. When Homeland Security agent Erica Evans (Elizabeth Mitchell) begins to find the answers, she joins a resistance movement to thwart the Visitors — even as they recruit her teenage son as their spy.

The new V television show is suffering from an attempt not to give away that which everyone already knows, no recognizable social commentary, and a complete lack of action. The original “V” miniseries was predicated on a single moment – when Donovan (Marc Singer) is standing on board one of the Visitor Motherships in a huge storage facility lined with giant, alien storage pods containing human beings…which turn out to be food storage for the aliens. Surprise! They’re here to eat us all. This fantastic reveal took place towards the end of a three-and-a-half hour miniseries. Prior to this we had seen the alien Visitors eating live food whole (the infamous gerbil-swallowing scene), and a Visitor with their human mask entirely removed.

The choices for the characters where dead on, all the main actors played their roles with exceptional quality for a TV series and the production values where superb. The concept held up very well in our modern setting and the opening sequence with the appearance of the giant ships over the cities of the world was just as breath taking and awe inspiring as the original. The reveal was very well done but the introduction of the inside element came out a bit too soon. I very much liked the conversation between the two teenagers on the news report comparing this moment to a well known movie it was identical to a conversation me and my wife had moments before the show began!

Now with that being said what I didn’t like about it was the pacing. The editing was so jumpy for me that I was having a hard time keeping pace. It felt like the original concept was being created with a 2 hour time slot in mind and then suddenly had to be cut down to less then an hour so everything they wanted to say was crammed into a spot too small to fit. The greatest acting, best special affects, and most intense action lose a lot of affect if your audience has to run to keep up with you. I am not saying it wasn’t good, but the pacing took a lot away from it for me. I wonder what was left on the cutting room floor. I applaud ABC’s boldness for introducing this remake of a popular series that aired in the mid-eighties. I think this series has the potential to be a long lasting series. At the very least a 3-4 years type series. The series has strong acting from a well seasoned cast of TV veterans along with big screen visual effects, this mixture makes for a solid foundation for the series to survive. So, if you are into syfy then is will be an appealing series. If you are new to this plot and the series background, then enjoy the ride.

The Blu-Ray comes with a collection of featurettes and bonus material that focuses on everything from Visual Effects to Casting. The only commentary you get is a track from the producers on one of the later episodes. A lot of the material relies on nostalgia for the original series, but it still works to serve to see how far this show has come. The A/V Quality is much stronger than the ABC HD broadcast. However, the plain jane Dolby 5.1 track left a lot to be desired. The 1080p transfers on all of the episodes are flawless and they’re presented uncut. There are a collection of unaired scenes included towards the last disc in the package. I’d recommend a purchase for dedicated fans. Everyone else should rent it first.