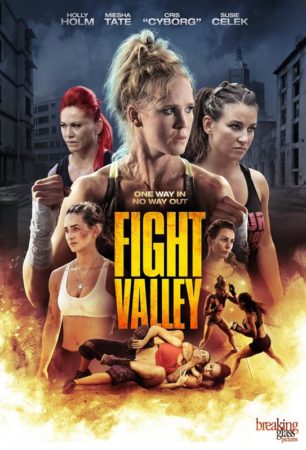 FIGHT VALLEY stars the world’s best female fighters including UFC Bantamweight champion Miesha Tate, Ronda Rousey-defeater Holly Holm, and UFC newbie Cris “Cyborg.” In this action-packed thriller, a young woman is found dead after getting involved with an underground fighting ring. Her sister begins training under a respected ex-fighter as she searches for the killer. FIGHT VALLEY will open in theaters nationwide and On Demand July 22, 2016.

Synopsis:
Twenty-two year old Tory Coro (Chelsea Durkalec) gets involved in an underground fighting ring in a rough section of Camden, NJ. When her bruised and beaten body is found abandoned in the woods, rumors begin to swirl that Tory died in Fight Valley, an unofficial neighborhood where fighters go to earn money.  Tory’s sister Windsor (Susie Celek) moves to town to start her own investigation. Jabs (Miesha Tate), a respected fighter turned gym owner, agrees to train Windsor as she prepares to come face to face with Tory’s killer and fight for justice.