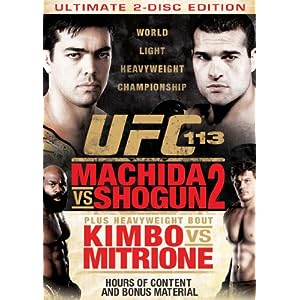 On October 24, 2009, unbeaten UFC light heavyweight champion Lyoto The Dragon Machida and challenger Mauricio Shogun Rua engaged in a five round war that divided the mixed martial arts world when the unanimous decision verdict was rendered in Machida s favor. But now, these 205-pound superstars will settle the score once and for all in the main event of UFC 113, and both fighters are vowing to take matters out of the judges’ hands and into their own. UFC 113: Machida vs. Shogun 2 Saturday, May 8th, live on Pay-Per-View from the Bell Centre in Montreal, Canada.

The action was fast and furious from the bell, with the champion displaying his trademark poise as he picked away at his opponent from the outside. It seemed like we might have been in for a repeat of the first fight early on, with Machida landing some rushing knees to the body, however it wasnt long before he switched things up with a couple of takedowns. Shogun was not to be denied though, scrambling back to his feet on both occasions.The end came seemingly out of nowhere; the challenger landed a clubbing right hand from a close-quarters exchange, felling the champion in the centre of the Octagon. Clearly stunned from the shot, Machida was helpless as Shogun pounced like a man possessed. The former Chute Boxe product creamed his countryman with some brutal ground strikes that saw referee Yves Lavigne dragging him away at just 3:35 of the very first round. The brutal finish put paid to Machidas untouchable aura.

UFC 113 was a return to form for the UFC following two underwhelming main events on their previous PPV efforts. Shogun vs Machida delivered as the cards featured bout, sending fans home happy after a disappointing end to the co-main event. Shoguns fans will feel that justice has finally been served, while Machida will need to go back to the drawing board as he faces a future in which hell look decidedly more beatable to his opponents. In notable preliminary action, Marcus Davis returned to his winning ways with a predictable stoppage of Jonathan Goulet, while Tom Lawlor snatched defeat from the jaws of victory against underdog Joe Doerksen, the only Canadian to taste victory during the event.

The DVD comes with a countdown to UFC 113 featurette. There’s also segments about the weigh-ins and the online featurette. If that wasn’t enough, there’s a rather lengthy behind-the-scenes that shows what goes into a production. The A/V Quality is pretty impressive, but it lacks the punch that the UFC Blu-Ray offerings have. Still, I’d recommend a rental to fans.