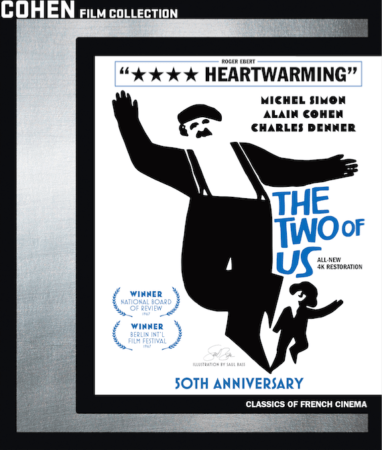 Charles S. Cohen, Chairman and CEO of Cohen Media Group, today announced that Cohen Film Collection will release the classic coming-of-age comedy-drama THE TWO OF US on Blu-ray, DVD and digital platforms on May 29, 2018. The recently restored and rereleased film – the debut of acclaimed director-producer Claude Berri – is presented in a glorious new 4K restoration.
A comically bittersweet tale, Oscar winner Claude Berri’s THE TWO OF US is also a poignant drama of identity and heritage. When an 8-year-old Jewish boy (Alain Cohen) living in Nazi-occupied France is sent by his parents to live in the country with the Catholic parents of their friends, he is faced with a culture clash both religious and generational.
As the grandfatherly (and flagrantly anti-Semitic) Pepe, beloved character actor Michel Simon – making a triumphant return to screen stardom after being sidelined for years by illness – infuses the role with a gruff tenderness, his growing relationship with the boy a touching portrayal of connection in a broken world.
The charming and poignant debut feature of the great producer and director Berri (Jean de Florette, Manon of the Spring, Tess, The Lover) was inspired by the filmmaker’s own childhood in wartime France. Widely praised upon its original release, THE TWO OF US stands with such classic films about childhood as Francois Truffaut’s The 400 Blows and the Taviani Brothers’ Padre Padrone. Roger Ebert called it “a heart-warming movie that showcases one of the last performances of the great Michel Simon.”
The praise continued when Cohen rereleased the restored film in 2017, its 50th anniversary. Alan Scherstuhl of The Village Voice called it “one of the great films about childhood and life during wartime.” Jeff Shannon of The Seattle Times said, “You’re unaware of the film’s power until the ending (well-earned and happy) hits you with an unexpected well of emotion.”
Cohen Film Collection presents the black-and-white world cinema classic in a beautiful new 4K restoration. Accompanying the film on both the Blu-ray and DVD are feature-length audio commentary track by Wade Major, film critic with NPR affiliate KPCC-FM and co-host and producer of the IGN DigiGods podcast, and the 2017 rerelease trailer, among other bonus material.