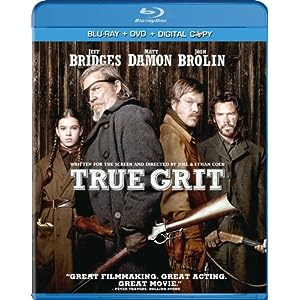 The name “Rooster Cogburn” has a certain brand recognition, and much of the film’s box office is simply down to old timers visiting the cinema in droves, desperate to catch a glimpse of the new John Wayne. Cogburn himself is, like Dirty Harry and Paul Kersey, the kind of vengeful, idiotic, super right-wing American hero who shoots first and asks questions later. He’s the likable bastard who embodies the American desire for swift, frontier justice. It’s no surprise that President Nixon adored the original “True Grit” and wrote a loving letter to Wayne praising his performance. Cogburn fits Nixon’s fantasy image of himself: that of the outlaw lawman, an American hero who righteously endures a little barbarism and blame so that order is restored and wrongs are made right. No surprise too that the original “Grit” was released at the height of the Vietnam War, its “shoot first, fix things later” plot tapping into, not only mass idiocy, but a kind of cozy fascism.

Both “True Grit” films are based on a novel by Charles Portis, and both tell a fairly straightforward tale in which a young girl (Mattie) sets out to avenge the murder of her father. Seeking help she hires Rooster Cogburn – played by Jeff Bridges in this re-adaptation – a hard-drinking Federal Marshal who prides himself on his ruthlessness. By both films’ end we learn a message typical of the western genre: an eye for an eye leaves the whole world blind and revenge takes its toll on the body and the soul.

If you’ve seen the 1969 film, then the Coens’ take is dull as hell. Virtually every scene is the same, the plot unchanged and every sequence replicated without an ounce of imagination or surprise. Whilst the Coens’ remake of “The Ladykillers” was zany enough to warrant viewing, “True Grit” is a decidedly pointless affair, every scene matching Henry Hathaway’s merely competent direction blow for blow.

Roger Deakins did a hell of a job with the cinematography in this film. The atmosphere in the film is just right to make it feel like this was shot forty years ago with the technology of today. The way the film is shot gives an authentic western feel that is impossible to ignore. The opening scene is a great example, as well. We fade-in to a light source slowly emerging on a black screen as the blurry scene slowly begins to focus and we’re shown the first tragedy of the film. The lighting was also exceptional. Conversations around a campfire and in candle light have never looked so great.

The Blu-Ray comes with a ton of featurettes and a bonus DVD copy. You also get an extensive look at the guns, costuming and cinematography that went into recreating late 19th Century Fort Smith. I would’ve loved to have had a Coen Brothers commentary, but I’m not holding my breath. The A/V Quality is impeccable with a transfer that shines throughout all setups. The DTS-HD 5.1 master audio track comes to life throughout the shootouts with Ned Pepper’s goons, the snake pit and beyond. I’d recommend this as a purchase for everyone.

0 0
Previous ArticleCONSUMER ADVOCATE/POLITICAL SPOILER/DOUCHEBAG RALPH NADER WANTS YOU TO INSPECT YOUR KRYPTONITENext ArticleSinger/Songwriter Gabe Dixon Releases Video for “My Favorite,” the new single off his debut solo album One Spark